This is a very beginning attempt to capture the recipients of awards throughout the regiments history. Any contributions welcome! (Ranks shown are those at the time of the award.)

The Colonel P. F. Hughes, CD and Mrs. B. Hughes Award for Excellence

Introduced by the QOR Association in 2012, it is awarded for excellence in improving the life and standing of The Queen’s Own Rifles of Canada.

Rifleman of the Year

An award presented by The Queen’s Own Rifles Association to a deserving individual.

Major (Warrant Officer I) Harry Fox MBE, who was the Regimental Sergeant Major from 1942-43 and, after a secondment to The Hasting and Prince Edward Regiment as its Regimental Sergeant Major, again from 1946-47.  Awarded annually to the Rifleman or Corporal considered to be the most proficient within his or her position. (Note criteria were changed for 2011.)

An elite group of The Queen’s Own Rifles of Canada paratroopers who have completed a minimum of 100 static line, round canopy parachute descents. 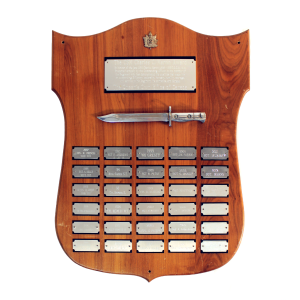 Named for CSM C. Martin DCM, MM, A Company Sergeant Major during Operation OVERLORD on 6 June 1944.  Awarded annually to the Sergeant or Warrant Officer, exclusive of Sergeants Major, considered to be the most proficient within his or her position. (Note criteria were changed for 2011.)

Named for Colonel E. Dalton DSO, ED, CD, Officer Commanding A Company during Operation OVERLORD on 6 June 1944, later Commanding Officer from 1951-1952 and Honorary Colonel from 1975-1984.  Awarded annually to the Junior Officer, exclusive of Captains filling field grade appointments, who best personifies the leadership traits of Colonel Elliot Dalton and considered to be the most proficient within his or her position. (Note: Criteria were changed for 2011.)

Outstanding Airborne Rifleman of the Year

Presented annually to the member of the Regiment who best personifies the traits of an airborne soldier or makes the greatest contribution to the Regiment’s parachute capability.

The Queen’s Own Rifles of Canada Annual Fitness Award

The Queen’s Own Rifles of Canada Public Service Award

Donated by Captain T. Nelligan CD, who prior to transferring to the Chaplain Branch was a member of the Regiment, most notably as 60th Company Sergeant Major.  Presented to the member of the Regiment who best personifies the spirit of public service.  The award is only presented in years where there is an outstanding candidate. 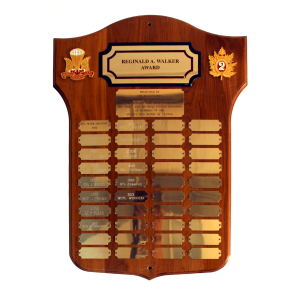 Named for Reginald Walker, who, as a member of 1st Canadian Parachute Battalion, participated in the airborne portion of Operation OVERLORD on 6 June 1944.  Awarded annually to the Master Corporal considered to be the most proficient within his or her position. (Note award criteria were changed for 2011.)

Named for Sergeant D. Keenan and presented annually to the member of the Regiment who completes the most static line, round parachute descents whilst employed within the Battalion. 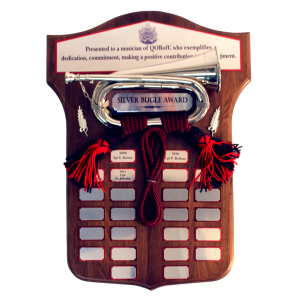 Awarded annually to the member of the Regiment considered to have made the largest contribution, in comparison to their rank, to the Band.

Awarded for unit marksmanship supremacy with the rifle of a 20-member Battalion team,  within the Regiment present by Carling Breweries.

Awarded annually for the highest standard of marksmanship with the rifle for an infantry battalion in the Canadian Army.

Presented by [then]  Capt H.M. Pellatt QOR of Canada for the 10 highest aggregate scores made during the Season of Battalion practices Ranges 200, 400 & 500 yards.