He was commissioned in the rank of Second Lieutenant in 1955 and continued serving in the local militia artillery regiment until 1959 when the Unit reverted back to its infantry roots and restored the title “The Brockville Rifles”. After serving one year with The Brockville Rifles, Pryer’s civilian employment took him to Toronto where he transferred to The Queen’s Own Rifles of Canada in 1960.

After commanding the Queen’s Own Rifles from 1972 until 1975, he went on to command the Toronto Militia District from 1980-1982, followed by his appointment as Deputy Commander Central Militia Area 1982-1984.

Promoted Brigadier General in 1984, Pryer commanded Central Militia Area until his retirement from the Canadian Armed Forces in 1986.

In retirement, he remained active through various military organizations and associations as well as being appointed the Honorary Lieutenant Colonel, and Honorary Colonel of The Queen’s Own Rifles of Canada between 1991 and 2005. He was active with the Queen’s Own Trust Fund and chaired the Regimental Senate.

In 2004, he represented the Regiment at D-Day ceremonies in France and he was one of the driving forces behind the fundraising for the Juno Beach Centre. General Pryer was one of the founders of Reserve 2000 and he has devoted considerable time and energy advancing the interests of Canada’s reservists. Among his many honours, he is Past President of the Canadian Infantry Association, Past Director of the Royal Canadian Military Institute, Governor of the Canadian Corps of Commissionaires (Great Lakes) Division, former Chairman of the Conference of Defence Association and has been a member of the Royal Canadian Legion for 34 years. 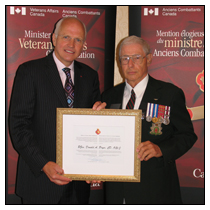 n 2007 he was a recipient of the Minister of Veterans Affairs Commendation.

In 2016 he was appointed the Honorary Colonel of the Brockville Rifles.