For The Queens Own Rifles of Canada, the end of the Second World War was drawing to a close exactly 75 years ago today. They had fought a ferocious enemy and kept up the fine traditions and demonstrated the Latin motto In Pace Paratus.

Their journey to war began at  University Armouries and Camp Borden. From there they traveled to Newfoundland, Nova Scotia, England, Scotland, Normandy, France, Belgium, The Netherlands and ended in Germany. They were led by three Commanding Officers (and a number of short term acting COs from time to time):

During the war 563 Queen’s Own Rifleman were killed in action and buried throughout Europe. Almost 900 were wounded, with some being wounded two or three times. Through out Hong Kong, Italy, and Northwest Europe 60 other QOR personnel lost their lives and we must never forget their sacrifice.  You can read all their names on our Virtual Wall of Honour.

On May 4th 1945 at 0100 hours Dog Company started to move from its position at Mittegrossefehn to continue the attack into Germany leading The Queen’s Own advance. Their only obstacles were blown bridges and road craters so they achieved their objective by 0200 hours. Baker Company began to pass through Dog Company at 0300 hours and renewed the thrust West and North into the city of Ostersander, Germany. The opposition was comprised of a couple of rear guards and Baker Company met their objective by 0600 hours while taking 14 enemy prisoners.

In the early afternoon of May 4th 1945 Charlie Company commenced its attack toward Holtrop, Germany. The objective of the Company was a crossroads. To get there the men had to advance through a terrain that consisted of agricultural fields with hedgerows set against a backdrop of an imposing forest. Charlie Company was met with fierce resistance during their advance. Their opposition included small arms as well as a 20mm Anti Aircraft gun. The consolidation occurred at 1500 hours, this resulted in three wounded while known enemy losses were of one killed. These last casualties were Riflemen T.H. Graham, A.W. Holdsworth, and A. Rosen.

With this the combat of the 1st Battalion Queen’s Own Rifles of Canada came to an end for the Second World War.  A German Lieutenant Colonel named Harms accompanied by the Burgomaster, traveled from the direction of Aurich. They approached Charlie Company’s lines under a flag of truce to negotiate the surrender of Aurich. At 2000 hours the Battalion learned of the unconditional surrender of all German forces facing the 21st Army Group in Northwest Germany, Holland, the Friesian Islands, Heligoland, Denmark and all ships of the German Navy adjacent to the German General Staff Headquarters. Ceasefire was to begin officially at 0800 hours the following morning, 5 May 1945.

Take a minute today to remember the sacrifices of generations of the past and never forget.

We will Remember them.
In Pace Paratus 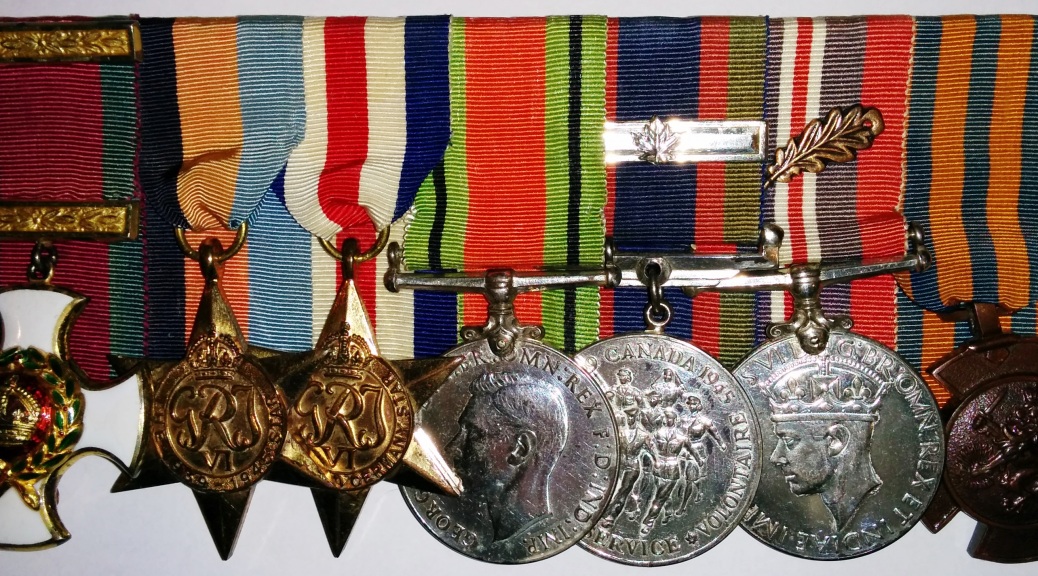 Thanks to the tremendous generosity of several members of the Regimental family, the museum has recently been able to acquire the medals of Lieutenant Colonel Stephen McLeod Lett, DSO who commanded the 1st Battalion, The Queen’s Own Rifles of Canada in Europe from 25 August 1944 to 30 November 1945.

Lett was invested in the Distinguished Service Order at Buckingham Palace 4 July 1945 in recognition of a personal reconnaissance on 20 September 1944 while planning for an attack on Fort de la Creche.

He was awarded the Bronze Lion (Holland) 22 December 1945 for his leadership and initiative leading The Queen’s Own Rifles and at times the 8th Canadian Infantry Brigade. He was also Mentioned in Despatches, 9 March 1946.

We’ll be creating a more detailed profile on Lt Col Lett in the coming weeks but its worth noting that he had served in The Queen’s Own Rifles prior to the Second World War. He also came from a somewhat military family as his father had served in both the Boer War and the First World War with the Canadian Field Artillery, and his grandfather Dr. Stephen Lett, had served in the artillery with the Volunteer Militia and was on Active Service at Port Colborne, Welland and Fort Erie during the Fenian Invasion of 1866.

As Colonel in Chief of The Queen’s Own Rifles of Canada, The Duchess of Cornwall met veterans and serving members of the regiment on Thursday June 5 and toured the Juno Beach Centre.

Former QOR Commanding Officer Lieutenant Colonel John Fotheringham is a Director of the Juno Beach Centre and recently passed on a request from them. They asked if it might be possible for us to make available some artifacts that related to D-Day and the Queen’s Own that the Duchess could see during her visit.

We checked around our collection and decided that items which had belonged to Lance Corporal Rolph Jackson might fit the bill. They had to be fairly small and easy for John to pack in his luggage when he headed to Normandy so we settled on six items.

As we approach another holiday season, we’re sharing some of the Regimental Christmas Cards that will be on a temporary exhibit at the Museum starting 1 December. This first series is primarily from the First World War with one from 1941. The Queen’s Own Rifles of Canada perpetuate the 83rd, 166th and 198th Battalions represented below.

“Canada just lost another of its great World War II veteran’s. RIP Grandpa, you will always be my personal hero. “