Excerpted from “The Queen’s Own Rifles of Canada, 1860-1960: One Hundred Years of Canada” by Lieutenant Colonel W. T. Barnard, ED, CD

The Times, the Northern Whig of Belfast and other British papers carried the following announcement in their editions of 12 December, 1909:

“The Secretary of the War Office announces that the Army Council have decided to accept the generous offer made through the Canadian Government by Col. Sir Henry M. PelIatt to bring the regiment under his command (The Queen’s Own Rifles of Canada) to England at his own expense for the purpose of participating in the Autumn manoeuvres of 1910″.

An official confirmation from Ottawa was given in The Mail of
Toronto, 17 February, 1910:

“It was announced in the House this afternoon that The Queen’s Own were to go to Aldershot this summer to take part in the manoeuvres but the Government would not bear any portion of the expense.”

What were the reasons underlying this magnificent gesture? Primarily, there were two. The first is given in Sir Henry’s own words, “I wish to mark the Jubilee year of The Queen’s Own by some memorable event. The Queen’s Own has given splendid service to Canada and to Toronto and deserves every recognition. The City of Toronto has always been proud of the regiment, and the Dominion of Canada had reason to congratulate itself upon the record of this most important unit of the Militia”.

The second reason weighed with Sir Henry even more strongly.  He believed that he could render a service to the Empire by taking the regiment over to the Mother Country. It would afford tangible evidence of the fighting forces available outside of Britain and would strengthen the cause of Imperial consolidation. The love of Canadians for their Motherland was deep-rooted and enduring. From time to time, it must have an opportunity of expression. That opportunity he intended to provide. It was typical of Sir Henry’s attitude that he was pleased when, throughout the stay in England, his men were referred to as Canadians rather than Queen’s Own. Proud as he was of the regiment he realized that, primarily, he and his men were representing Canada; and, from originality of conception to brilliance in execution, the whole project was a masterpiece in that Canada was portrayed throughout to the best possible advantage.

Naturally, for some time prior to 1910, Sir Henry had been turning over in his mind the general idea of the trip. The matter had been discussed with the Governor-General, Earl Grey, to whom Sir Henry was an honorary ADC. In 1909 Earl Grey paid a visit to England and, in the course of an audience with King Edward VII, the proposed trip was brought to the King’s attention. The King heartily approved. “Splendid, splendid,” he said. “It will be most helpful; but tell him, if he is going to do it, it is most important that it be soon-preferably next summer.”

This explains why the final arrangements were rather hurried. It is also indicative of the lengthening shadow of war. Lord Roberts had made many efforts to arouse his countrymen to the danger. Little notice was taken except to brand the older soldier as a war-monger. The King, however, viewed the matter differently; and, in encouraging the proposed visit of The Queen’s Own he saw one way in which a demonstration of Empire solidarity might act as a deterrent to the Kaiser’s ambitions.

Such a far-flung scheme required a great deal of co-operation from authorities at all levels, from employers, and last, but by no means least, from the families of all ranks. The necessary co-operation was fully realized. More than anything else this showed that Sir Henry’s basic ideas were shared by all. As a practical example of their support, the City Council insured all the men whilst overseas.

The first parade of the overseas battalion was on 29 June, 1910.
From that date on, it trained separately. A great deal of organization was involved, including the issue of a second uniform, the new khaki.  [You can read more on this in Uniforms of the  1910 Trip to England.]

Timeline of the 1910 50th Anniversary Trip to England:

14 August – Battalion arrives in Montreal met by the 65th Carabiniers. Breakfast was had at their armouries. 2pm battalion marches through the streets of Montreal en route to Levis for further training. This training was conducted under the supervision and instruction of eight Royal Canadian Regiment instructors.

19 August – Major General Sir William Otter gave the battalion a critical inspection in all departments and pronounced himself satisfied.

20 August – Battalion boarded the S.S. Megantic for departure to Liverpool.

28 August – 4 September – Battalion settles down for hard training to designed to fit the troops to take part in the forthcoming divisional manoeuvres.

2 September – The battalion, in full marching order, went on a thirteen mile route march with the 1st East Kent Regiment (The Buffs). Incidentally, The Buffs had been extremely helpful and a very friendly feeling had sprung up. It was soon noticed that both units used the same “Regimental”. Sir Henry explained to The Buffs’ Commanding Officer that, near the end of 1882, permission had been granted by The Buffs for The QOR to adopt the tune known as “The Regimental Quick Step of The Buffs”. The music had been composed by Handel. After a little searching The Buffs’ archives, a copy was found of the original letter sent to Canada. Thus the matter was resolved.

5 September – Battalion inspected by Major General Sir H. Smith-Dorrien. The following day The Queen’s Own marched out with the 6th Brigade, 2nd Division, to take part in divisional manoeuvres which took place in Hampshire. “Perhaps the best effort of The Queen’s Own was against The East Yorks near Basingstoke. The latter regiment had grown a little careless in regard to taking cover so the umpires decreed that The Queen’s Own fire had wiped half of them out. Night attacks, sleeping on the ground and a rather hit-and-miss food ration tested the power of endurance. Throughout the troops did amazingly well so that, on 12 September, when the manoeuvres ended they received general acclaim.” Battalion went into rest time.

13 September – Battalion embarked on train to London. Arriving at Nine Elm station, the battalion was met by the Irish Guards and marched to Chelsea Barracks where they were quartered. Free time was had.

14 September – “The Governor-General received today the following telegram from the King:

I have had the pleasure of receiving today at Balmoral a representative detachment of The Queen’s Own Rifles of Canada and of hearing of their successful work on manoeuvres. The spirit thus shown by the Dominion is a good augury of the future of the Imperial Army”.
(signed) George, R and I

16 September – Inspected by Field Marshal Lord Roberts, The Honorary Colonel. This was followed by an inspection by The Minister for War, Lord Haldane, and accompanied by General Sir Wm. Nicholson, Chief of The General Staff. Then after inspection the Battalion lead by the band of The Coldstream Guards, marching through London to the Guildhall where the Lord Mayor had invited the Regiment to lunch.

20 September – In the Morning, The QOR, headed by the band of The Royal Scots, to Nine Elm station en route to Whitchurch, Hants.

21-23 September – Army manoeuvres in progress. QOR Battalion was part of Red Force under General Plumer which was marching westward to meet the Blue enemy. “Finally, contact was made in the area of Salisbury. Cavalry clashes took place and an interesting item noted that one of the two aeroplanes The Red Force had for reconnaissance had to “alight unexpectedly” between the two armies. Red had now lost fifty per cent of its air force but it had an ace up its sleeve in the shape of a captive balloon. So, after much night marching from centre to flank, battle was engaged. Through all this the battalion did well; in fact it even had the temerity to make prisoners of a few regulars. The troops were coming along.”

24 September – Directly from the manoeuvres, The Queen’s Own marched to Dinlon Station and entrained for Liverpool. The band of The Buffs saw the battalion off at the station. With a civic send-off the battalion boarded the S.S. Canada. Nineteen Rifleman were left; ten in hospital and nine who had made special arrangements to return later.

2 October – Sighting of Quebec. A brief inspection at Quebec by the Governor General, Earl Grey, was followed by entrainment for Montreal.

3 October – North Toronto Station was reached at 5 pm. Mayor Geary was at hand with a civic welcome. Then began the march to the Armouries. The parade was headed by The Royal Canadian Dragoons; a detachments from the Toronto Garrison followed; finally, came The Queen’s Own in both its home detachment and overseas battalion. 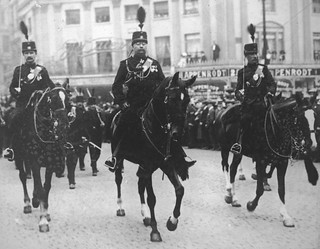 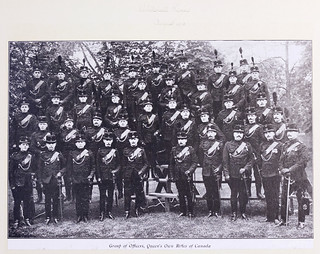