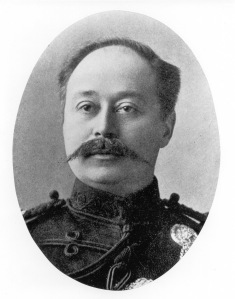 Casa Loma was the former estate of Major General Sir Henry Pellatt, CVO  (January 6, 1859 – March 8, 1939) a prominent Toronto financier, industrialist and military man. Travels in Europe gave him the love for fine art and architecture that would spur his vision of Casa Loma, his “house on the hill,” which took three years and $3.5 million to build in the early 1900s.

This romantic side was uniquely juxtaposed by his other lifelong passion: his involvement with The Queen’s Own Rifles. Sir Henry, who joined The Queen’s Own as a rifleman in the 1870s, was knighted in 1905 for his military service with The Regiment, upon which he spent many hundreds of thousands of dollars. The Regiment’s band was often engaged to entertain guests at the castle. In 1910, at his own expense, to mark The Regiment’s 50th anniversary, Sir Henry took the entire 600 man regiment – including its horses – to England for military exercises from 13 August to 3 October. The museum, filled with memorabilia relating to the Regiment, dating as far back as the date of its formation in 1860 and its involvement in every military action undertaken by Canada since then, attracts thousands of visitors from around the world each year.