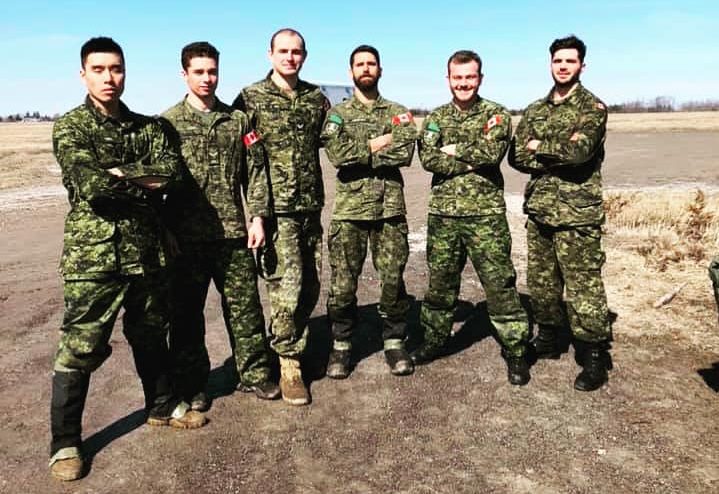 February 8th -The 2020 Toronto Garrison Officer’s Ball, hosted by the Regiment at the Liberty Grand. As Toronto’s premier social event for the military community and supporters, the 203rd edition of the Garrison Ball commemorates the sacrifices and achievements leading up to the 75th anniversary of the Liberation of the Netherlands and V-E Day.

Highlights of the Event included: 800 guests, including nearly 500 Army Officers from the Greater Toronto Area, as well as members of the Royal Canadian Navy and Royal Canadian Air Force. As well as the Regimants Band and Bugles were the house band for the evening.

February 26th – Last night the QOR Sergeants’ Mess hosted our annual memorial dinner for Sgt. Aubrey Cosens VC, commemorating the night where Sgt. Cosens’ actions won him the Victoria Cross. Last night was special not only because it was the 75th anniversary of that event but also having the @ash_of_c Sergeants’ Mess join us (Sgt. Cosens’ Regiment before joining the QOR during the war). Special thanks to RSM O’Halloran and his loving wife Raquel for organizing this event, and to all the family and friends who helped.

April – Regiment mobilizes contingent for Operation Reassurance the Canadian Armed Forces response to the COVID-19 fight. Members were on standby until the end of August of 2020

April 26th – The Regiment celebrated our 160th Year as a Regiment. This historic day is usually recognized by a series of events attended by the Regiment and family. Due to the limitations presented by COVOD-19, the Regiment put out a Video.

All unit Training Cancelled due to COVID-19 until September.

August – Master Corporal Jessome and Captain Toohey-Foughnan deploy on Op Impact to Jordan as mentors to the Jordanian Military.

September 19th – 68 jumpers from both QOR of C and 3 RCR participated under clear skies, from two CC-130J aircraft, in formation.

September 20th, 2020 – The Queen’s Own Rifles of Canada held their Change of Command and Change of Appointment ceremonies. Due to COVID-19 restrictions, a small virtual ceremony was held at Moss Park Armoury.

November 11th – Small contingent from the Regiment conducted a small ceremonial at the Regimental Cross of Sacrifice.

November 22nd – Ex Quick Rig was conducted though due to high winds parachute jump was cancelled.

December 12th – The regiment could not hold its annual Christmas dinner. But awards were still handed out.

February – Nine of our members participated on JRTC in Fort Polk, Louisiana with 3 Royal Canadian Regiment. This is the high readiness validation for 3 RCR in which they participate in various operations, including Airmobile and Airborne. [PH Mar]

February 25-27 – About 50 members participate in Exercise Maroon Frost 2 at the Burwash Range and Training Area near Sudbury.  This included the successful completion of the QOR’s first Cold Weather Operator course (formerly Basic Winter Warfare as the first in the series of cold weather courses).  The Ex included training in improvised shelters, snares and preparation of prey, fires and heaters, a cold-water survival dip in the lake, and a ruck march out of the training area with rabbits for dinner. [PH Mar] 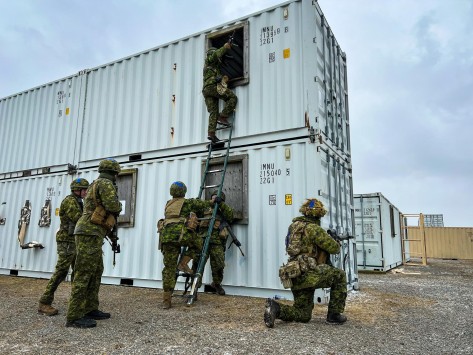 April 8-10 – Exercise Maroon Hammer 1, was held in Meaford and Borden and consisted of conventional and field firing ranges.  The exercise culminated with a Parachute descent from a CC-130J Hercules onto DZ Patterson at CFB Borden.

April 22-24 – The Rogers Challenge competition was run by the Queen’s York Rangers, and consisted of teams of four from across the Brigade completing various challenges along a 40km route. Our teams put in a strong performance and were the first to cross the finish line, ultimately placing 2nd and 4th out of over a dozen teams. Congratulations to Corporals Bingham and Salinas (Team Leaders), and Corporals Taylor, Kalogerakis, Chang, Teper, Patterson, and Conquer for their performance. Special mention goes to MCpl Divito for organizing the teams, MWO Burns for running the water crossing stand, and Sgt Doria for running the rappelling stand.