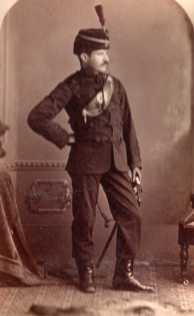 Colonel Joseph Martin Delamere was a native of Ireland, son of Dawson and Jane (Martin) Delamere, both natives of the Emerald Isle, the former born July 1, 1803, and the latter July 29, 1808. In Ireland Dawson Delamere was a civil engineer. He married Jane Martin in 1832, and on June 1, 1855, they settled in Toronto, where Mr. Delamere was connected with Her Majesty’s Customs until his death in 1876. His wife survived him ten years. Their children were as follows:

Colonel Joseph M. Delamere was born July 2, 1849, and was but six years of age when he came to Canada with his parents in 1855. He was educated at Upper Canada College, and while a student in that institution, joined the Queen’s Own Rifles as a Rifleman in 1865. His military service included

In May, 1868, Colonel Delamere was appointed an assistant clerk at the Provincial Legislature, and in 1871 became postmaster there.

On April 22, 1878, Colonel Delamere was united in marriage with Miss Elizabeth M. Denison, daughter of the late Col. George T. Denison, of “Rusholme,” Toronto. To this union the following children were born:

The Colonel and his wife were members of the Church of England, and he was a member of the Toronto Club, the Canadian Military Institute (1898-1900), was on the executive committee of the Dominion and Provincial Rifle Association, and a member of many other organizations.

Reference: Commemorative Biographical Record of the County of York, Ontario Containing Biographical Sketches of Prominent and Representative Citizens and Many of the Early Settled Families, 1907