Governance
The Museum Board continues to meet periodically throughout the year under the Chair Jim Lutz, and recently welcomed Ms. Michele McCarthy as a new board member. The board recommends an annual budget to the QOR Trust, reviews the financial progress, and is also currently working on cooperation with Casa Loma operator Liberty Entertainment Group, reviewing options for collections insurance, and development of an emergency plan.

We continue implementing our 2017-2022 Strategic Plan, developed after extensive consultation with our volunteers, visitors, archive users, and key members of the regiment. The annual Implementation Plan is reviewed by the museum team at least quarterly and by the Museum Board at each meeting.

Volunteers
In February we once again held our Volunteer Recognition Night at the Royal Canadian Military Institute generously supported by one of our donors. We were joined by members of the Museum’s Board and by the Commanding Officer and MWO Johnston representing the Regimental Sergeant Major.

We said farewell to a couple of volunteers including one of our long time volunteers who moved to Ottawa. But we also welcomed three new volunteers in September including one with qualifications in photo and paper conservation, one serving member of the regiment, and one from another regiment (we must be doing something right!)

This year volunteers put in over 1,500 hours – although we know there have been lots of hours we haven’t managed to track for work done outside our usual Thursday evening work nights.

Exhibits
April saw us hold a special reception to officially unveil the new McEachren Tunic exhibit case which was installed in December 2018. The family of the late Regimental Sergeant Major Scott Patterson, whose estate funded the majority of this project, were present to assist with the ceremony. Also on display were a number of interesting items that are not usually on exhibit.  Photos from this event can be found here on our Flickr site.

We continue to work on upgrading our exhibits. This year all our timeline and interpretive panels were reprinted directly on a much more durable plastic product that will better withstand the Casa Loma environment.  It was also an opportunity to ensure consistency across all our exhibits. And with permission from the Fort Erie Museum we were able to use images of art works in their collection to re-design the interpretive panels for the Fenian Raids exhibit (image above.) 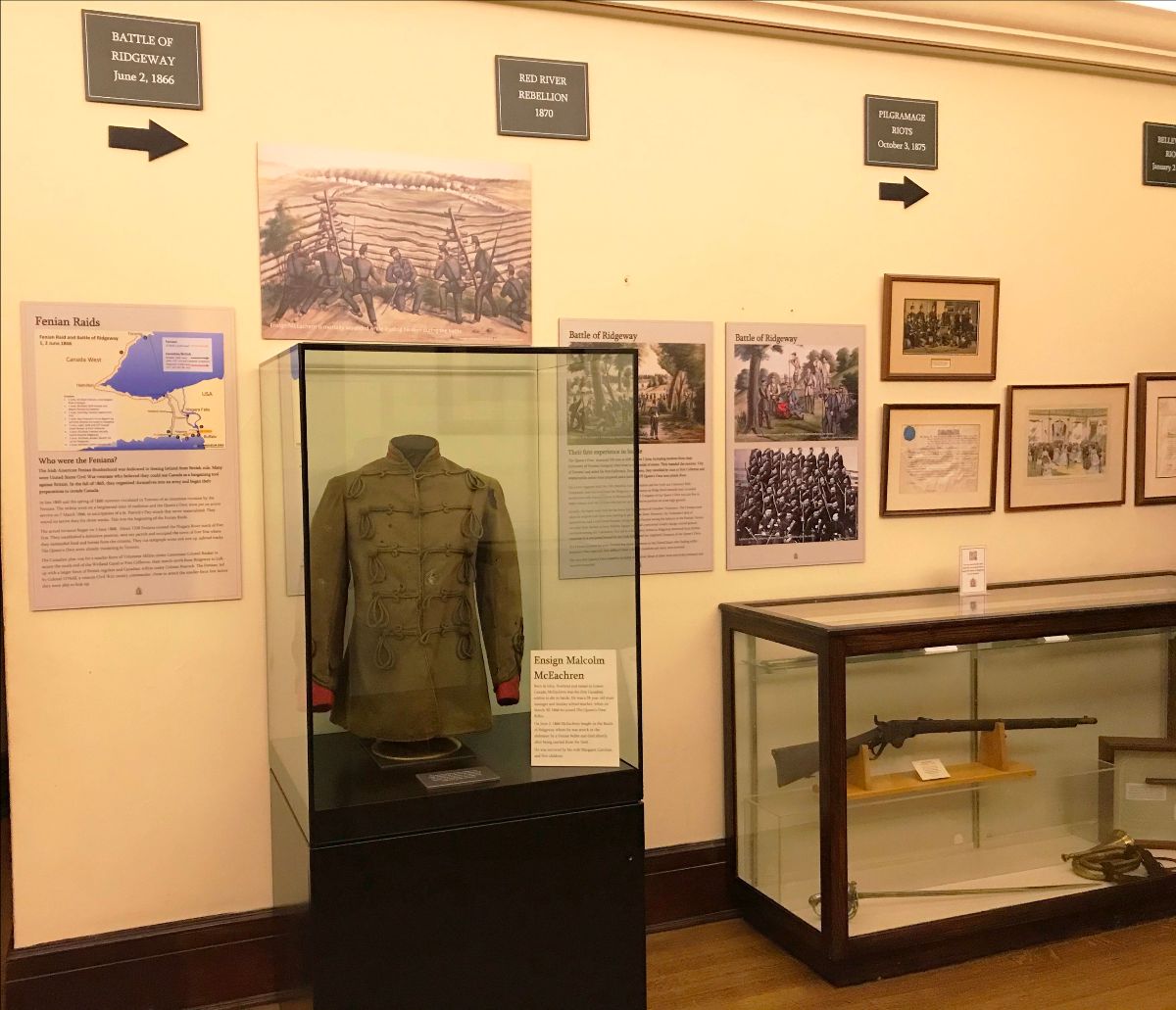 We completed two more pop-up banners on the regiment’s participation in the North-West Rebellion, and started pre-production work on banners on the QOR in The South African War.

Collections
In 2019 we processed 47 accessions – which ranged from a single item to several hundred. One significant item was the donation of a bugle believed to have been used at the Battle of Ridgeway by the bugler of Capt Sherwood’s Company – The Trinity College Rifles company. While we can’t verify that it was indeed used then, we did research the maker’s mark and confirmed that it was definitely from that period and over 150 years old.

We were also able to purchase a collection of over 500 documents believed to have been collected by Colonel George Taylor Denison II. These span 1802-1885 but the majority are general militia orders from 1855 to 1869 including the order for the Queen’s Own to mobilize for the Fenian Raids and can also be found on our Flick site.

Some other notable accessions included:

We continue to update our online catalogue as we complete the cataloging process and update the database.

The collections side of operations also involves the appropriate storage of our objects and we continue to purchase appropriate archival quality storage boxes and other materials as well as additional shelving, as our budget allows.

Worth Noting
In September the Regiment held the Change of Honorary Lieutenant Colonel Parade at Casa Loma and the museum was pleased to create an exhibit of regimental sports related material – some dating back to the 19th century, in honour of our incoming Honorary Lieutenant Colonel Vicky Sunohara. Vicky was a Canadian Olympic Hockey medalist and is currently the coach of the University of Toronto women’s Varsity Blues hockey teams. Photos of this awesome event can be found here.

In November we held our annual QOR Day at Casa Loma with over 55 volunteers and serving soldiers staffing our exhibits and programs and over 1,000 visitors attending. As always there are more photos available online!

And earlier this month we helped to facilitate another meeting of the Toronto Military Curators Network to share and discuss items of common interest – and there are lots!

Lastly our thanks!
Thank you to all who have made a financial contribution this year to support our work. If you haven’t, fear not as there is still time left to make a donation to the QOR Trust and receive a charitable tax receipt for 2019.  A donation of any size will help make a big difference.

On behalf of our whole museum team, thanks again for another great year and best wishes for the holiday season!