In our museum collection we have loads and loads of photos – some in files and some in frames and some in albums and some more recent ones digitally. And in addition to those, over the past two and half years we’ve been taking more photos – of museum events, of each artifact and even photos of photos!

Much of this effort has been led by Captain (Ret’d) Larry Hicks who has been diligently photographing each artifact in our collection – a mammoth task on which he’s made amazing progress but still lots more to go. Among these have been some amazing photo albums for which Larry has painstakingly photographed each individual photo. He has been assisted by Corporal Justin Dreimanis, a serving soldier in the regiment and a recently graduate of Humber College’s photography program. And last but definitely not least, our WWII “guy” Master Corporal Graham Humphrey has scanned every WII photo in our files.

Of course the more photos we collected, the question increasingly became what do we do with them? Photos of artifacts are added to our Museum Collection Database but how could we share these to a wider audience – be they descendants or researchers or members of the regimental family?

And so I’m pleased to announce the official launch of our new QOR Museum Flickr site for sharing all these photos – almost 4,800 actually! There are some great photos from the Cold War regular force days, awesome officer photos from the late 1800s, a scrapbook of Fenian Raid newspaper clippings, a great record from the 1910 trip, and loads of WWII photos from Newfoundland, New Brunswick, England and Europe as some examples.

All these photos are organized into “albums” – 48 so far. Albums contain photos with something in common – they could be all from a real album in the museum’s collection, or they could contain photos on a certain topic – 1910 trip or band photos for example. Photos can show up in more than one album. So a band photo from the 1910 trip will be in both the band and 1910 trip albums – pretty cool if we do say so ourselves. There are special topic albums on shooting, sports and the Pellatts among others.

And all of this is still a work in progress – we’ll keep organizing and sort and uploading – and of course taking more photos so come back regularly to check them out!

But wait – we need your help!

And so this is where we hope you can help 🙂 If you can identify people or places or sometimes even dates in any of our photos which don’t already have that information indicated, PLEASE take a moment to share what you know in the comments box. Before you can do that, you will need to create a Flickr account if you don’t already have one but it only takes a few moments and we would very, very, very much appreciate any help you can give us in documenting these valuable historic records of QOR history.

As a sample of what you can look forward to, here’s a gem: No 5 Company in Stratford, June 1866 (shortly after the Battle of Ridgeway) 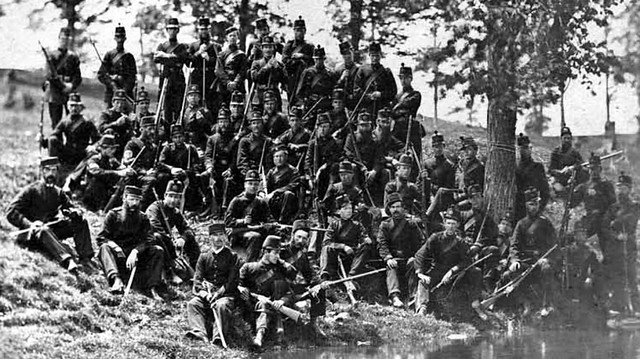 Happy viewing and let us know what you think!

2 thoughts on “Photos, photos and more photos – now on Flickr!”