On the afternoon of Thursday June 8, 2017, a plaque was unveiled next to the site of the Tip Top Tailor building by Heritage Toronto, the Dunkelman family and the Queen’s Own Rifles of Canada, honouring the legacy of distinguished military officer and entrepreneur Ben Dunkelman.

Below are remarks given by Lieutenant Colonel Sandi Banerjee, CD, Commanding Officer of The Queen’s Own Rifles of Canada:

It’s an honour for me to bring greetings from Ben’s Regiment on this historic occasion.

On the day I took command of The QOR, I received a very appropriate gift from a friend and mentor. Like Ben, this gentleman was also a warrior and Brigade Commander – he sent me a copy of Dual Allegiance, which reminded me all too well of the challenges and the conflicting demands one faces as a ‘citizen soldier’.

In his book, Ben mentions a special parade in Toronto, one to honour returning soldiers from the First World War. Thought he never glamorizes warfare, he states, “…from the moment of that Toronto Parade I have been sure of one thing: I am a Canadian, proud of Canada’s heritage and proud – if need be – to fight for it.”

Today I stand before you equally proudly of the fact that our Regiment welcomed Ben and all Canadians equally those many years ago. Without thought to religion or family background, The QOR of C has been a home to tens of thousands of proud Canadians with the same thoughts as Brigadier Dunkelman: not to seek conflict, rather to serve those who cannot protect themselves.

Toronto and Torontonians have a rich history and association with Canada’s Armed Forces. We stand in front of HMCS York, steps from Fort York Armoury and historic Old Fort York. We are standing very near the grounds where The QOR of C gathered before stepping off for Ridgeway to protect southern Ontario from invading forces 151 year ago. Though our early days, sending expeditionary forces to the Nile and Boer Wars, the World Wars, the Korean conflict, peace enforcement missions and the war in Afghanistan, or todays’ deployments in the Middle east, Africa and eastern Europe: Toronto has always supported our men and women in harm’s way.

The Regiment recently returned from two very special events overseas: the 100th Anniversary of the Battle of Vimy Ridge and just prior to that, our commemorations in Normandie, where Ben and his fellow Band of Brothers served. There we received not one but two honours: The Freedom of the City of Bernier sur Mer, where we were the only Toronto Regiment to land on D-Day, and the FotC of Anisy, where again, this Toronto Regiment was the only Allied unit to achieve their D-Day objective. These came at enormous costs, but as Ben showed by his personal example, the costs of freedom, of human dignity and decency, are borne by ordinary citizens accepting extraordinary responsibilities in times of great need.

I can also tell you that the people of Normandy, of France, have never forgotten the sacrifices of this Toronto Regiment and of the million Canadians who liberated them through two World Wars.

It is entirely appropriate then, that we gather here today to similar remember: to honour a proud Torontonian and Canadian who served twice to protect those in harm’s way. I would like to thank the City of Toronto and Heritage Toronto for bestowing this honour on a member of our Regiment and our city. May it serve as a reminder to all who come across it of a great man and our joint history together, a reminder of our City and her soldiers who have carried a part of Canada with them across the globe.

Thanks also to Captain Rob Chan and his family for their efforts in working with Heritage Toronto to make this happen.

You can read more about Ben Dunkelman here. 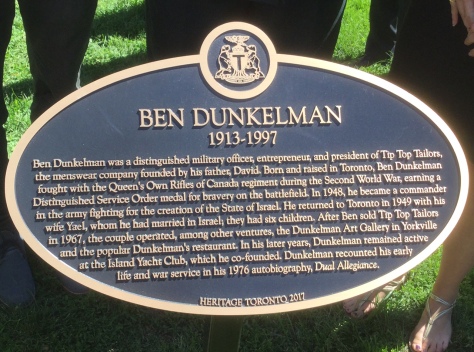