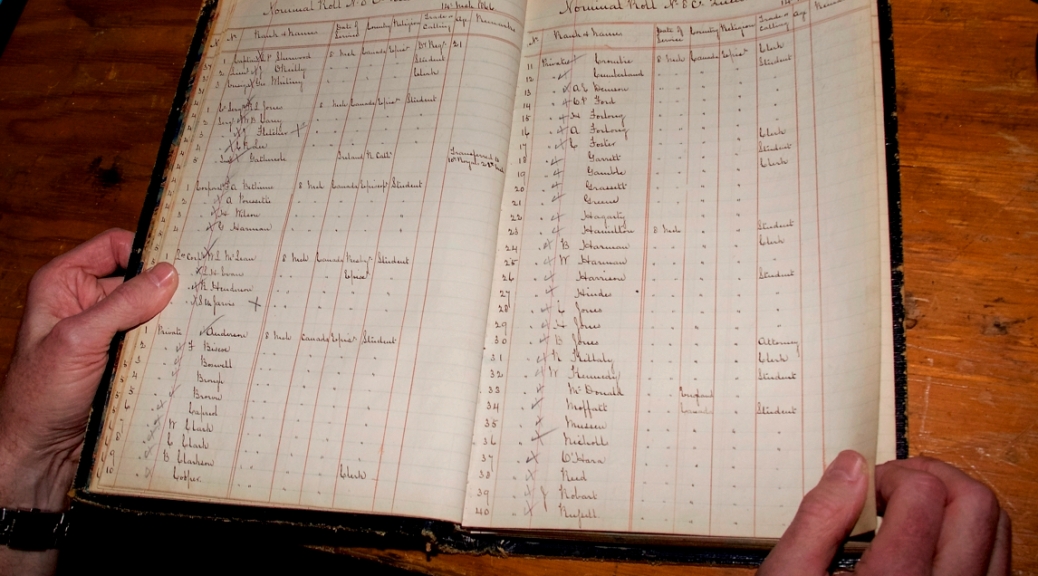 This is the first of an ongoing series of articles in which museum volunteers were asked to share information about an interesting artifact they have come across in our collection – some of which may be on exhibit but others may be in storage. We start with Curator John Stephens.

So what artifact have you chosen to spotlight for us today?

One of my personal favourite items in our collection is not from the museum side  but from our archives. It’s a bound ledger of nominal rolls by company beginning in March 1866 – just three months before the Fenian Raids – and pretty much annually through to 1882.

Why do you find this so interesting?

The history of the regiment is usually considered in terms of battles and campaigns and weapons and uniforms and training and deployments – but ultimately at its most basic level, it’s about people. And generally when we think of people in the regiment we know the stories of commanding officers, other officers and senior NCO’s but these rolls list everyone who served from the youngest bugler to the Surgeon Major.

Over the various years, these contain a varying amount of information on each person listed but they do allow us to follow the progression through the ranks of many of our regiments earliest members.

I’m also into family history research and there is no question the March 1866 roll is probably the most valuable for genealogists as it includes country of birth, religion, age and occupation.

Obviously it would be handwritten – is it legible?

Surprisingly yes it is for the most part. The ink for the June 1866 roll is very faded but generally the handwriting is legible – there are certainly some exceptions of course.

What condition is it in?

Surprisingly good condition considering its almost 150 years old and it was actually in active use for 16 years. The cover and spine are holding up well and while there page are somewhat brittle, they really aren’t too bad.

Just recently we received a donation to cover the cost of a new metal cabinet with doors in which we are now storing our highest at-risk items. Hopefully this will provide some better protection for items like this ledger.

With the 150th anniversary of the Fenian Raids and the Battle of Ridgeway coming up in June 2016, there seems to be increasing interest in the information that we have in our collection related to that period from researchers and descendants of those who fought.

We’ve digitized this ledger and posted it on our website Archives page. This provides people access to the information while still protecting the artifact itself from damage caused by handling. You can check it out here.

We’re also going to use the 1866 rolls to do some analysis of the regiment’s make up and how reflective it was or wasn’t of Toronto at that time.