9066 Regimental Sergeant Major Frederick A. Williams, MC, DCM was born 15 May 1888 in London, England, the son of Joseph and Rose Williams.

At the time of his enrollment into the 3rd Battalion CEF on 22 September 1914 at Valcartier he was single, a labourer, and lived at 177 Brunswick Ave Toronto. On 14 Jan, 1916 he was awarded the Distinguished Conduct Medal and on 18 February 1918 he was awarded the Military Cross.

He died 5 Dec 1935 of illness attributable to his military service, he is buried at Park Lawn Cemetery Toronto.

“For conspicuous gallantry, he voluntarily accompanied an officer to bring in a wounded officer in broad daylight, under heavy rifle and machine-gun fire. He also displayed great courage and resource in maintaining the wires of communication between the signalling station and other centres, under continuous heavy and fire. The repairs had to be made under the most difficult and dangerous conditions.”

“For conspicuous gallantry and devotion to duty. When his company was moving into the line all his officers became casualties. He, realising the importance of getting men forward, reorganised, and took charge of the company, and led them to their battle positions. After the assault he moved his company up in support of the attacking battalions, and personally superintended the evacuation of the wounded, working unceasingly for thirty six hours with great determination and energy. His cheerfulness, cool judgement and fine leadership were an inspiration to all ranks.”

You can see his partial documents here 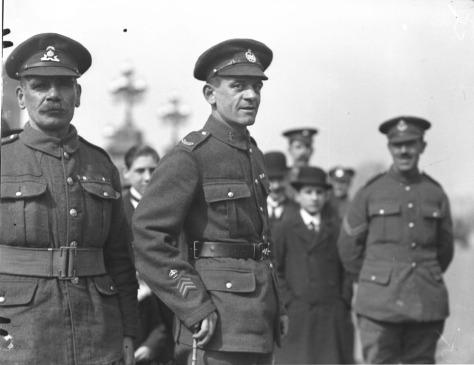