K76048 Rfn Chester Clinton Tuttle was born on 27 May 1909 to his parents Charles Allen Tuttle and Mabel “Nettie” Tuttle of Victoria, British Columbia. He had three siblings: Gilbert, Edythe and Gertrude.

There is an entry from the War Diary of the Queen’s Own Rifles that describes some of the action that occurred on the day of Rfn Tuttle’s death:

“​During the attack enemy mortar and arty fire was very intense, and owing to darkness, house clearing was very difficult. Two Stretcher Bearers from “C” Coy were taken prisoner, and were not released for four hrs. Until a friendly tank forced their captors to relinquish hold on them. Bn received approx 100 casualties in the action but left in its wake, fields littered with German dead.”

Rfn Tuttle is buried in Groesbeek Canadian War Cemetery and is commemorated on page 572 of the Second World War Book of Remembrance. His inscription reads: “In memory of my son. Gone but not forgotten by his Mother, sisters and brothers.”

With research by Rfn Chris Gondos who carries Rfn Tuttle’s Coin of Remembrance. 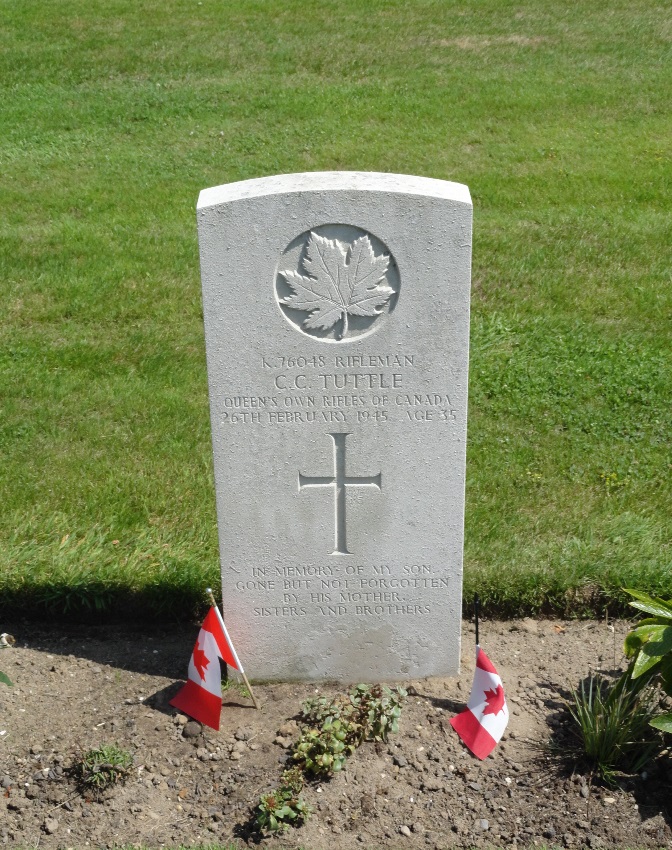