Major Joseph Rogers probably had the best lawn ornament on the block – a working cannon!

His story starts in Leeds, County of York, England in 1833. Growing up, Rogers attended Spofforth boarding school near Weatherby, in magnificent steeplechase country. At 18, he departed Liverpool for New York on the ship the West Point.

The passage was an unpleasant one, in many ways. The ship was carrying 350 passengers from Ireland in steerage – 17 of whom died during the trip. Sickness broke out when the water supply was exhausted, they encountered storms near Newfoundland, and sailors robbed Rogers of all his money.

Nonetheless, Rogers worked his way to Toronto, then rode a construction train to the end of the line: Bradford. The next morning, he took the steamer Beaver over to O’Brien’s dock in Shanty Bay. Rogers worked on his uncle’s farm in Oro for a period of time, attending St. Thomas’ church and singing in the choir.

About 1852, when he was 19, Rogers joined the militia and his commission dates to 1856 when he made Ensign in the No. 1 Rifle Company. He was a lieutenant in 1860 with the Queen’s Own Rifles, until they dissolved [Note: The Barrie Company of the QOR were actually made independent again on 21 November 1862] and he transferred to the 35th Battalion Simcoe Foresters [Note: The 35th “Simcoe Battalion of Infantry” was not authorized until 14 September 1866.]

The first colours of the battalion [The Simcoe Foresters], by the way, were embroidered by Mrs. Rogers, the former Miss Ann Whitebread whose family were wheelwrights and carriage makers, their home and shop were located at 134 Collier St. Rogers remained with the Simcoe Foresters for 16 years, rising to paymaster and major, earning five medals throughout his service.

It turned out that farm living was not the life for Rogers. He moved to town and took a job as assistant to John McWatt the postmaster. Later, he started work in the registry office eventually appointed high constable in 1864. Rogers acted as constable, bailiff, copyist and auctioneer for the town and county. Among his routine notices of insolvency, etc., the following item in the Sept. 2, 1869 newspaper stood out:

The undersigned will pay One Hundred Dollars to the person who poisoned his dog on Monday last. If the poisoner, besides admitting his guilt, can substantiate the fact of his being the poisoner, no proceeding at law will be instituted against him, and he shall receive the reward offered.

Ann and Joseph’s home at 9 Bradford St. was built in 1865. The Rogers property at one time extended up to Elizabeth Street (now Dunlop Street) and back to Toronto Street and the house originally had a verandah on three sides. This photo, from about 1900, although it’s difficult to see any details very clearly, suggests the second-floor porch and other changes would have occurred later. 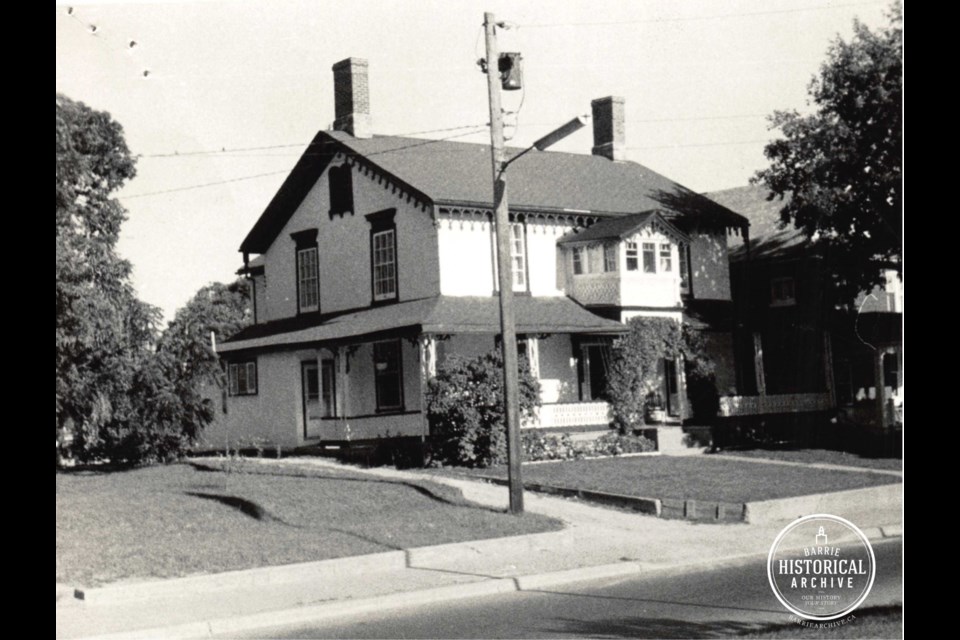