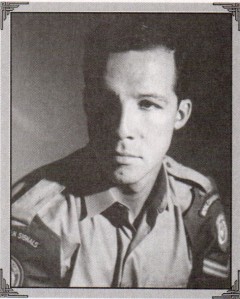 Thomas was born in Hamilton, Ontario on May 13, 1938. He enlisted in the Army on July 26, 1956 as a Peacekeeper and served in Canada, Gaza and Cyprus. Can Amy- Queen’s Own Rifles of Canada and RCSIGS. Thomas’ accomplishments include R&TG OP, GP 111 and Leading Infantryman GP 111. His specialties include: Basic Training Instructor, Small Arms Instructor, Drill Instructor and Detachment Commander. He participated in quelling of the Kingston Penitentiary riot and the FLQ uprising in Montreal. He served with United Nations in Egypt and Cyprus. He was honourably discharged in February 1972. He was married twice later to be divorced and separated. Thomas has two children, five grandchildren and three great grandchildren. He retired at seventy years of age and lives in Stony Creek, Ontario. He has been a member of Battlefield Legion Branch 622 and for 22 years