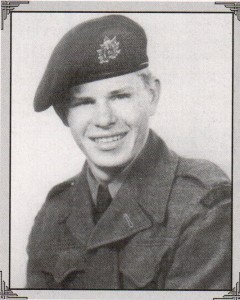 Corporal William Thomas “Tommy” McKee was born in Windsor, Ontario on December 5, 1935, the first son of William and Dorothy McKee. They moved to Kingsville, Ontario in 1936 and then to Leamington, Ontario in 1940. He attended elementary and high school in Leamington.

He joined the Canadian Army in January 1953 and served with the Victoria Rifles and the Queen’s Own Rifles 2nd Battalion as an anti-tank gunner. He was featured on a recruiting pamphlet while stationed in Wainwright, Alberta. He attained the rank of Corporal.

He was released in January 1958 and returned to Leamington where he married Irene “Mable” Saunders. He worked as a stevedore and for many years for Brewers Retail. He was a Life Member of The Royal Canadian Legion Branch 84 and served many years as Sergeant-at-Arms.

William passed away in 1996 at the age of sixty.