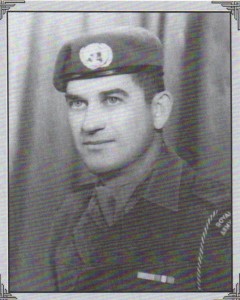 William was born in Tecumseh, ON January 8, 1935. He left home at age 17 and joined the Army on November 26, 1952 in London, ON. He was assigned to the 2nd Rifle Battalion for basic training, and to Wainwright, AB for advanced training. He served in Korea with the 2nd Bn Queen’s Own Rifles. After his release, he joined civilian life again but soon realized how much he missed serving his country so reenlisted with the Royal Canadian Amy Service Corps. L/Cpl. Lesperance had many postings, Such as Cyprus in 1964 with the UN Peacekeepers, Chilliwack, BC, CSF Holberg and CFB London. He was released on September 14, 1976 and was awarded the Canada Korea Medal, United Nations Medal for Korea, United Nations Service Medal for Cyprus, Peace Keeper’s Medal, and the Canadian Decoration Medal for long service. William has been married to Rose for 50 years. He has been a member of Forest Legion Branch 176 for 15 years and has been the Veteran’s Service Officer for the past 10 years.