Chief Warrant Officer Shaun C. M. Kelly CD joined the Army in November 1978 and his early training was as a member of the Central Militia Special Unit (CMASU). On April 1st 1979 the CMASU, including CWO Kelly, were transferred to The Queen’s Own Rifles of Canada and became 60th Company initially parading out of the Canadian Forces Staff School on Avenue Road in Toronto.

During the winter of 1979 Kelly deployed with Charles Company 1RCR as part of the NATO forces in Norway. In the summer of 1980 he was attached to 4 Service Bn as a driver during the NATO exercises in Germany. He completed his Basic Parachutist Course January 1982 and was promoted to Master Corporal that same year. Kelly spent the next two years as part of armoured defence platoon of the regiment which was equipped with the jeep mounted 106 Recoilless Rifle.

CWO Kelly devoted much time to his regiment’s historical re-enactment group the Skirmishers, including the trip with 25 other soldiers to visit the Royal Green Jackets in 1984 and performing in the “Beating of the Retreat” ceremony in Winchester, England. 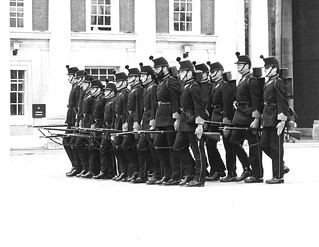 CWO Kelly earned his British parachute wings during an exchange in 1990 with 10 Para of the British Territorial Army. This event included 4 tactical parachute drops into various swamps throughout Scotland and a beach assault from a landing craft.

From 1990 CWO Kelly was employed full time at the Regiment, starting as the Unit Recruiting Sergeant, devoting 6 years as Regimental Quarter Master Sergeant and completing the time as Operations Officer before taking a position at the Brigade Headquarters as Brigade Safety Officer. In 1994 CWO Kelly was tasked to support the Canadian Forces contingent commemorating the 50th anniversary of D-Day. As well as the ceremonies in Normandy, ceremonies were conducted at the sites of other Canadian battles, the most memorable event being a service at the Menin gate in Belgium where the names of many commonwealth soldiers with no known grave are inscribed. Like all members of the unit full time cadre, Kelly spent many summers at the Area Training Centre in Meaford Ontario. His duties there included instructing recruits and as Company Sergeant Major of reserve training company.

In 2002, with the support of many of the surviving veterans and the CO, CWO Kelly initiated the Regiment’s “Coin of Remembrance” program. The program’s aim is to remember the 1700 Riflemen who have died in battle by providing all serving and former Riflemen with a coin with the name, service number and date of death of a member of the Regiment, as of 2017 the program is still in place. Since 2002 Kelly has held the coin for Pte Ernest Bateup of the 3rd Battalion CEF who was killed by artillery fire 29th December 1915 while on sentry duty in the trenches.

In 2008 Kelly was promoted CWO and was appointed RSM of the Regiment. From 2003-2014 the Regiment provided outstanding support to the war in Afghanistan sending nearly 70 Riflemen overseas. As RSM, CWO Kelly was instrumental in the selection process for soldiers volunteering to deploy overseas and was a guiding force behind the excellent support the Regiment provided to not only it’s soldiers but also their families while their sons and daughters were deployed. Although he was unable to deploy himself, CWO Kelly’s proudest achievement during this time was the privilege of meeting almost all the returning Riflemen at the airport upon their return.

During his tenure as RSM, the Regiment also celebrated it’s 150th birthday in 2010. Events during the birthday celebrations included visits to the associations of the 1st and 2nd battalions in Victoria and Calgary, a parade of well over 200 Riflemen past the Colonel in Chief Princess Alexandra in Toronto, and a Birthday Ball with over 700 Regimental family members in Toronto. CWO Kelly also had the privilege to participate in a visit to London England where a contingent from the Regiment said farewell to Princess Alexandra and met their new Colonel in Chief Camilla, The Duchess of Cornwall. During the visit CWO Kelly was afforded the honour to present the new Colonel in Chief with her own coin of remembrance.

CWO Kelly retired from uniformed service in 2011 but still serves the Army as the civilian Safety Officer for 4th Canadian Division. He lives in downtown Toronto with his wife Kathryn Emanuel. Since 2012 he has volunteered at the Regiment’s Museum and Archives at Casa Loma in Toronto where he spends most of his Thurs nights. One of his passions has been to research and record the names and details of all the former Sergeants Major of the Regiment which hadn’t been documented well in the past.