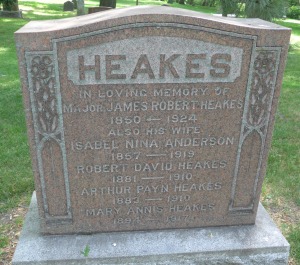 Major James Robert Heakes was born 11 July 1840 in Alleghany City, Potter County, Pennsylvania, USA, son of Samuel Heakes and Martha Louisa Payn. The family had moved to Toronto by 1851 when his brother was born.

He was a Major in The Queen’s Own Rifles, having joined in 1868 and served in the Riel Rebellion as paymaster with the rank of Sergeant. By the 1877 he is listed as Quartermaster, and he appears to have retired in 1898.

In 1912 he made a grant application under the Fenian Raid Volunteer Bounty Act for service as a Corporal in No. 4 Company QOR in the Fall of 1870. It appears however that his claim was disallowed because he name did not show on an active service pay list for that period.

He later he worked at the Customs Office in Toronto.

His wife was the former Belle Horsey of New York who he married 5 Jun 1879 in Kings, New York, USA.

His two sons, Robert David (at least 1901 to 1906 as per pay sheets) and Arthur Payn (c. 1905-1906 per paylists) were also both members of The Queen’s Own Rifles and very active in work with Boys’ Clubs, especially Broadview Y. M. C. A. They both died, unmarried, before they reached thirty, and are buried in the Necropolis Cemetery, Toronto.

As per regimental paylists, his brother Samuel Richard Heakes also served from at least 1865 to 1878. In 1898 although there is a pay record for his son Samuel Rigbye Heakes who also joined the Canadian Expeditionary Force in 1914.

He died in January 1924 and is also buried in the Necropolis Cemetery, Toronto.