He died shortly after landing on Juno Beach on D- Day at the age of 23.  He is buried in Beny-sur-Mer Canadian War CemeteryGrave Reference: I. C. 4.

A scholarship was created by his aunt and other relatives to be awarded at Orde St School. The first recipient was Marian Albin.

After leaving our camp enclosure we boarded our ship, an armed merchant cruiser converted to a landing ship infantry. We were told the invasion date was June 5 but, owing to the atrocious weather conditions, it was delayed for 24 hours. Even then the weather didn’t improve much at all, so it was to be “June 6″ at early light.

We knew that it was France, as we had been paid out in francs (invasion money). We could only take ten shillings English currency with us, any other having had to be changed into francs.

Of our beach signal section, combined operations, only myself and a sergeant were accompanying the assault troops of The Queen’s Own Rifles. Another seven members of our section were to follow later. This was to be repeated on the other two sectors, plus the CO (28 in total). The sergeant and I shared a cabin with two QOR sergeants.

Reveille was about 3:30 am on June 6 and before breakfast, we all lined up for our rum ration, after which it was absolution, followed by a short service conducted by the Canadian padre.

We then boarded our L.C.A’s landing craft assault. Boarding the L.C.A’s in that kind of stormy weather and the heavy swell was a very risky situation. It was a case of climbing down the scrambling net and judging when to drop into the landing craft. You can imagine the ship rolling one way and the L.C.A. the other. If it was not timed accurately, it was possible to drop between the ship and the L.C.A. and be crushed to death. In any case you wouldn’t survive in that heavy sea, not being able to ditch your equipment (50 lbs plus a 46 wireless set).

Together, with troops of the QOR, we were seated along the sides of the L.C.A. under a steel overhang about 30” in width. We pulled away from the “mother ship” and nearing the coast we heard the guns from the warships pounding away at the coast and the rocket ships lighting the sky where previously the air force had been softening up the shore defences. By this time things were really “hotting” up with the shells and bullets splattering all around up.

We were now nearing the shore, approaching the crystal defencer, concrete pyramids and angle iron set in concrete with mines fixed to them plus barbed wire, and pointed metal staves capable of ripping out the bottom of landing craft.

Fortunately our craft managed to squeeze between these obstacles more by luck than judgment. Others weren’t so fortunate and there were many casualties. The rough seas didn’t help at all. Then came the shout “Down doors!”

The ramps went down and we raced down the ramp quite orderly only to find ourselves up to the waist in water. On reaching “dry” land we raced to reach the sea wall (quite high). Actually not being a good sailor and a bit queasy, I was relieved to get my feet on the ground in spite of the horrific circumstances. All hell was let loose, with heavy machine gun fire from beyond the seawall, which we climbed and crossed over, and the coastal railway line with more barbed wire obstacles, plus mines.

I count myself very lucky to have survived firstly the assault and then the rest of the war. In Normandy there are many cemeteries containing the graves of thousands of allied service men.

Cyril Crain was a wireless operator with the UK. 19 Beach Signal Section, Combined Operations, and was attached to the QOR June ‘1943 in preparation for the invasion of France. Mr. Crain landed with The Queen’s Own Rifles at Bernieres-sur-Mer on D-Day, and was good friends with Sgt Freddy Harris, one of the many riflemen to die on the beach that day. 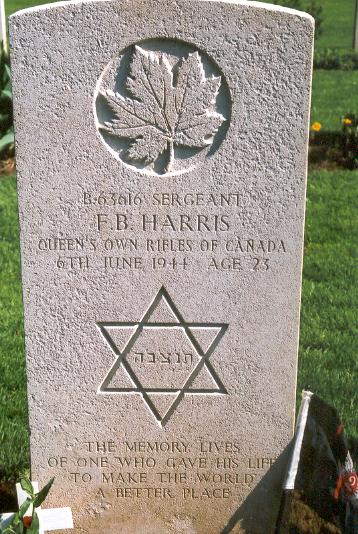 In memory of a man from ’43
He came from a land across the sea
“Hi there, Limey!” he yelled with a grin
“Hallo!” I replied, “how’ve you bin”
“Go inside and stow your gear,
Bring your pals, we’ll go for a beer”.
From this moment a friendship grew.
We ate, we trained, and socialised too.
Then one day the orders came
Realising now this wasn’t a game.
We boarded ship, then on our way
And during the night we gathered to pray.
Landing craft lowered seven miles from land.
We scrambled down nets, hand over hand
Into the boats, a fearsome task.
Look after us Lord, that’s all I ask
The sea was stormy, we had a rough ride.
I looked at my buddy who sat by my side,
“Take care Limey, you’ll do fine,
Good luck Canuck, old friend of mine”.
The ramp went down, we plunged into the swell,
The beach before us a living hell.
Our feet on the ground, we dashed to the wall
From the corner of my eye I saw him fall.
Again and again I still ask why!
My friend from Toronto, why did he die?

This poem is dedicated to Freddy Harris, a sergeant in the Queen’s Own Rifles of Canada – killed in action on D-Day 1944. “My Buddy”

Note the Crains and Harris families were successfully connected after this video was made.