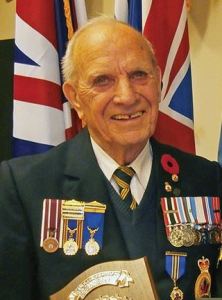 Harry had a good family life in Montreal answering the call of the 1st Battalion of the Queens Own Rifles of Canada in May 1951 when he was 17, immediately being deployed to post-war Germany. When accepting the Citizen of the Year Award in 2000, Harry stated that “I learned more about people in those two years, than I have in the last twenty. It taught me a lot about comradeship and that you can’t get by on your own. Let’s just say that I grew up in a hurry”.

At age 20, Harry was posted to Calgary becoming one of the youngest sergeants in the military, working his way up through the ranks to become responsible for 200 soldiers. Harry worked at the Quebec Command between 1957 and 1959.

In 1960 Harry returned to Calgary where a beautiful young cowgirl from Crossfield, Alberta, Ethel Irene Bartholomew  captured his heart. Harry was posted to Germany again Nov 1960. Harry and Ethel were wed in Iserlohn, Germany May 22, 1962.

It was in 1963 that the young Groom family was posted to Victoria, B.C. when the 1st Battalion QOR of C was relocated from Currie Barracks in Calgary to Work Point Barracks at Esquimalt Garrison. In 1965, Harry did his first tour of duty as a QORofC Peacekeeper for the UN in Cyprus, where he received a very important – very brief – telegram there “Son born 4 Jun 65. Both well.” announcing the birth of their only child, Terence John Groom.

In 1970 Harry was promoted again to Company Sergeant Major, and again deployed to Cyprus. In 1970, with the downsizing of the Canadian Forces, the 1st Battalion of The Queen’s Own Rifles of Canada was rebadged as the 3rd Battalion Princess Patricia’s Canadian Light Infantry. In 1975, Harry completed his third and final tour of duty with the PPCLI in Cyprus, which by this time had become a bloody war zone. Harry decided to retire from the military in 1978. In the words of Harry’s last commanding officer,

“Groom is scrupulously honest and a completely trustworthy man who can be totally relied upon to loyally execute any task assigned to him. He is quick to grasp the crux of problem situations and able to apply common sense and initiative in resolving difficulties. His ability to manage people, individually and in groups, is highly developed. In his capacity as Company Sergeant Major, he has been responsible for the daily activities of up to two hundred soldiers, duties which have been accomplished flawlessly. His personal and social life is beyond reproach and has been an example for other to emulate. In summary, Master Warrant Officer Groom has set and performed to the highest possible standards throughout his 25 years of service to his country and his regiment.”

Harry went on to work as a Victoria Sheriff for 17 years. After Harry retired from active duty in the military, he became very involved in the Princess Patricia Branch #91 Legion in Langford in 1978, holding many Executive/Chair positions year after year, including Branch President for 10 years. Harry worked tirelessly beside volunteers. When the Goldstream Food Bank needed a new home and was dangerously close to closing, it was Harry that brought the Legion to their aid giving them the Legion basement.

President of the Legion housing society for many years, Harry was hands on looking after the Prince Edward Lodge. Harry was the consistent and courageous leader behind the creation of the Alexander Mackie Retirement Community, which provided financial sustainability for Branch #91. Harry had a hand in the naming of Veteran’s Memorial Parkway. When Branch #91 needed a new cenotaph, it was Harry that brought people together. His favourite word was “team”.

Together we built Veteran’s Memorial Park in tribute to the “Birth of a Nation” where, at the Battle of Vimy Ridge, Canadians gained a sense of national pride and awareness, where the Canadian values of valour, fearlessness, inclusion, compassion, courage and intelligence gained international and self-recognition, for the first time. Harry’s bronze statue in Veteran’s Memorial Park can been seen sitting on a bench, reading to a young boy.

Even with Harry’s accomplished professional and volunteer careers, he still found time for his family, to coach kid’s hockey, teach cadets and scouts, and find a new love. Harry married widow Phyllis Irma Wansbrough who shared Harry’s passion for their community. With the two of them working together, the Food Bank was a happy place. Harry was a happy man that loved music, the Montreal Canadiens, to sing and charm the girls with his humour.

Harry had an impeccable military record with 27 years of service and 17 years in the Sheriffs. He was recognized in both 2000 and 2008 as Citizen of the Year, and was granted the Royal Canadian Legion’s highest honour, the Meritorious Service Award, awards which are among too many to name.

Harry was survived by his only child Terence Groom (Theresa Mahan), grandson, Michael Groom of Edmonton, AB, who is father to his great grandson, Skyler Groom, and grandson, Hayden Groom of Inukjuak, Quebec.