868342 Sergeant Major Hugh McInnes George was the 12th Sergeant Major of the Queen’s Own from 1892-95 and served overseas during the First World War. He was born in Toronto on 14 January 1857 to James George and Christina (Clara) Rogers.

He first appears in the records as a Rifleman in 1879, then in 1886 as a Corporal attaining his Sergeant’s certificate. In 1888 he was promoted to Sergeant and in 1889 became Secretary of the Sergeants’ Mess and by 1891 the President. In Oct 1892 he is promoted to Staff Sergeant and appointed as Sergeant Major an appointment he holds until he resigns in December 1895 after some internal conflict between the Sergeants and the Officers of the Regiment. At an unknown time, he was awarded Colonial Auxiliary Forces Long Service Medal at which time he was listed as Honorary Lieutenant and Quartermaster.

He worked as a clerk and accountant and was with the Dominion Income Tax Department at his death.

On 5 November 1883 he married Katharine Emily Proudfoot. They had a son William Proudfoot George who died in 1908 at the age of 24, a daughter who died at birth and another daughter Isobel who lived until 1979.

In 1916, 21 years after leaving the Queen’s Own, he lied about his age and volunteered for active service with the 182nd Bn saying he was 43 when he was actually 59. Before being sent overseas he was transferred to the 255th (QOR) Bn CEF and promoted to Sergeant. By June of 1917 he had arrived in England and was transferred to the 12th Reserve Bn and voluntarily reduced himself in rank to go to France. By 1918 the Army finally realized he was over 60 and sent him back to Canada to be medically released. During his time back in Canada while still on active service he was run over by a car while running to catch a streetcar. His injuries were severe and ended-up with one leg shorter than the other after he recovered. George was released from active service in Nov 1919 but not before he was promoted to Lieutenant. After the war he appears in documents occasionally as a member of the QOR Association sometimes listed as Honourary Captain.

George died 6 April 1930 at the age of 73 from an accidental overdose of drugs while at Toronto Western Hospital recovering from injuries sustained after being run over by, (another), car, he and Katharine are buried in Mount Pleasant Cemetery.

You can see his wartime service records here. 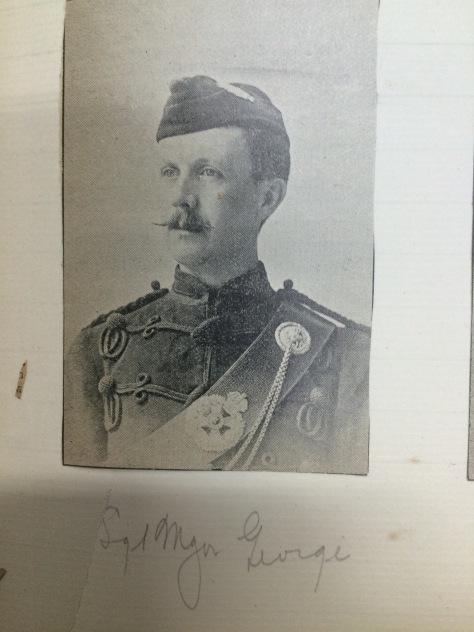