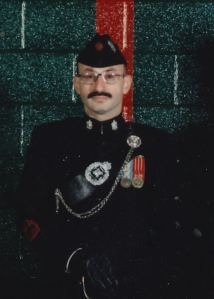 Chief Warrant Officer Joshua C. Figa, CD joined The Queen’s Own Rifles of Canada in the fall of 1972, having previously been a cadet in #2754 Cadet Corps. In addition to the rank and trade courses required for advancement, CWO Figa was qualified as a Basic Parachutist, Demolition Instructor, Small Arms Instructor and Nuclear Biological and Chemical Defence Operator.

He served in various appointments within the Battalion including Section Commander, Platoon Second in Command, Company Quarter-Master Sergeant, and Regimental Quarter-Master Sergeant, as well as having instructed on several summer Warrant Officer’s Tactics and Training courses (the SWOTT-C experience). He was also appointed Company Sergeant Major Normandy Company: The Rifles Depot where in addition to his other duties, he compiled and drafted the Manual of Drill and Ceremonial for Rifle Regiments (Vol 1).

CWO Figa served with the United Nations Emergence Force Middle East (CCUNEFME) from August 1975 until February 1976 and a second tour between April and November of 1978. In 1976 he was deployed to Montreal in support of ‘Operation Gamescan’ the Canadian Forces support to the XXI Olympic Games.

Josh holds a Bachelor of Fine Arts degree from York University and is self employed as a freelance photographer. He has exhibited his work locally and internationally, including a travelling photographic exhibition in the USSR, and has published photographs in a variety of local periodicals, as well as in James Weapon Books.