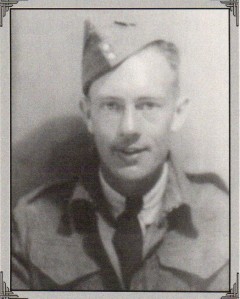 Murray was born on February 25, 1917 in Oro Station, Ontario. He enlisted in the Royal Canadian Army on February 17, 1943 and served with the Queen’s Own Rifles 2nd Regiment in England, France, Germany and Holland during World War II. On September 16, 1943, his wife was notified he was missing. His troop was going through a burnt-out village when they realized it was full of Germans, everyone scattered and he hid out until he was able to jump on an English troop to rejoin his own troops. His wife received a telegram stating that all was well on September 26, 1943. Murray stayed a year after peace was declared and worked as a bartender in a rehab hospital set up in the Amstel Hotel in Amsterdam before being discharged on March 26, 1946. Murray has been a member the Royal Canadian Legion for 10 years.