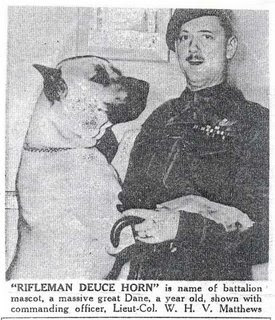 The Mascot, Deuce Horn a huge Great Dane joined the 2nd Battalion, Queen’s Own Rifles in Camp Ipperwash, Ont in 1952. He originally belonged to Second Lieutenant Bissette who left the Battalion to become a pilot with the Fleet Air Arm of the Royal Canadian Navy. Bissette died in Nova Scotia in 1953 while piloting his Sea Fury Air Plane.

When Lt Bissette left the Queen’s Own Lieutenant Colonel Matthews took custody of Deuce Horn and made him the Queen’s Own Mascot. When the Battalion left for Korea, Deuce Horn embarked with the main body. They boarded the SS Marine Lynx and en route Deuce Horn was put into a cage on the main deck. For some reason or other, every time an American sailor would pass by his cage would growl and bark until the sailor was passed his so called turf. He had no problems with members of the Queen’s Own and would wag his tail and allow the Queens Own near him but not the Americans. Must have been the uniform. Because of his good conduct while on the ship the Commanding Officer promoted Deuce Horn to Lance Corporal.

After arriving in Korea, Deuce Horn went missing for about two weeks and it was feared that he ended up in one of the Kimchi pots that were famous at the time for cooking up a good stew. Deuce Horn suddenly appeared at the Officers mess in a state of physical disarray. He was exhausted and passed out in front of the fire place. Once he recovered to a state where he could be held accountable for his action he was charged with being AWOL (absent without leave) and escorted before the Commanding Officer by then Lieutenant Ron Awful Werry. He was reduced to the rank of Rifleman and sentenced to 14 days CK (confined to kennel). He must have learned his lesson as he never went AWOL again during his tour of duty.

Upon his return he went on to Gordenhead (British Columbia), from there he went with the Queen’s Own Rifles to Germany to serve with NATO at Fort MacLeod, Hemer, Germany. Deuce Horn died from cancer in February 1958. His grave digging was supervised by DSM George Collins and the task completed by Master Corporals Seeley, Arsneault, Jim Carroll and the six pallbearers shown in the photo below. It is said that the ground was like digging in dry clay, it was hard as a rock to work with. The 2nd Battalion, Queen’s Own Rifles were on parade for the funeral. The burial site is along the fence that separated the Royal Canadian Horse Artillery and the QOR of C on the far right side of the ball field. A cement marker was placed on the grave by the sergeant from Pioneer Platoon,  Sergeant Rocky Merritt and Master Corporal Frank Melton was in charge of the task.

Deuce Horn was not just any old dog
A True Rifleman he went for his morning jog
When he was on the square and on parade
He’d sit at attention, very quiet he stayed

Deuce served at Ipperwash and in Korea
At Gorden Head and at Fort McLeod
He would sit still upon the square
As the RSM shouted quite loud!

Stormin’ Norman was doing Battalion CB when he mended Deuce’s Foot
doing pack drill with Rifleman Norm, the Deuce drilled in fine form
Major McCullough asked Norman to be the Battalion Dog Man
He turned down the dog handler request, now he thinks it was a bad plan

Some say the Deuce went AWOL over in Korea
Others say that he just got lost looking for the media?
But after two weeks he again showed up
As Regimentally frisky as a new born pup!

Another unit’s Regimental Mascot, is a long bearded white goat
Deuce was a Regimental mastiff – he’d thrust out his chest and gloat
He is buried o’er there in Germany, near the fence at Fort MacLeod
Buried with pomp and ceremony, of the Deuce, we were all very proud! 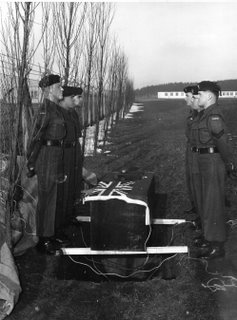