Major William Beverly Crowther, MC was born in Toronto, Ontario, Canada on 29 March 1889. He was the son of William C. and Kate M. Crowther, of Toronto and the brother of Second Lieutenant Stanley Lorne Crowther, who served with the Royal Flying Corps and died on 20 September 1917.  Following his early education at the Model School, William attended Upper Canada College from September 1902 until June 1907 and then the University of Toronto.

A salesman by trade with Warren Bros. Wholesale Grocers, Crowther also served in the militia as a Lieutenant and then Captain with the Queen’s Own Rifles prior to his enlistment as a Lieutenant with the 3rd Battalion, Canadian Expeditionary Force, on 22 September 1914. Crowther was promoted to the rank of Captain in the 1st Infantry Brigade (Central Ontario Regiment) on 2 April 1916 while serving as the Brigade Transport Officer, and later became of Major C Coy, 3rd Battalion on February 27, 1917.

He was killed in action in Fresnoy, France on 3 May 1917 and is buried at Ecoivres Military Cemetery (Ref: VI. H. 11.) in France. He was posthumously awarded the Military Cross in April 1917 for conspicuous gallantry and determination in leading his men at Vimy Ridge. 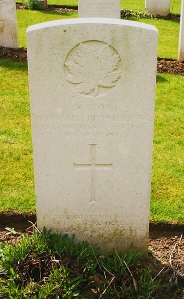 One thought on “Crowther, William Beverly”