Captain John Francis Matthew Crean was the son of Quarter Master Sergeant Thomas Crean of the 16th Regiment of Foot of the British Army. Thomas Crean retired to Toronto, Ontario in 1864 after 23 years of service, serving in numerous British Army garrisons including Gibraltar, Corfu, Jamaica, Quebec, and Curragh Camp in Ireland where John was born in 1858. Thomas was tailor to the QOR in the 1860’s and 70’s with a shop on Yonge St just below College.

Possibly inspired by his father’s military service, in 1875 John joined the Queen’s Own Rifles in Toronto at the age of 18. Within 2 years he was promoted to Sergeant in the “Law Student’s” Company and by 1885 he was serving in the North-West Canada campaign as Color Sergeant to his Company.

Shortly after his return from the North-West Canada campaign Crean was promoted to Staff Sergeant and appointed as Sergeant Major. Crean served as Sergeant Major until 1 March 1889 when he accepted his commission as 2nd Lieutenant. It is known he became a Lieutenant in the QOR and probably a good shot as there is a photo of him as part of the Rifle team in Ottawa in August 1895 at the National shooting competition.

After his time in the QOR Crean accepted a Captain’s commission in the Gold Coast Regiment where he served on the West African frontier leading a contingent of Hausa soldiers in Ghana. After six years of rigorous service in West Africa, including during the second Ashanti uprising, Crean returned to Toronto due to ill health. In 1906 he married Mildred Corning but his illness resurfaced and he succumbed to his dysentery on 24 March 1907 after less than a year of marriage. 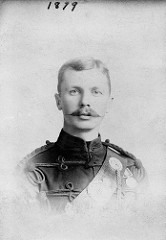 Toronto, March 24, – After a year of close confinement to his bed, his natural robust health having been ruined in his king’s service on the West African frontier, Captain John F. Crean died at his residence, 242 West Bloor Street, Saturday afternoon.

Deceased was married about a year ago, when there were signs of improvement in his health; but unlooked-for complications set in suddenly and he never regained his strength sufficiently to again enjoy the outdoor life of which he was so fond. Capt Crean’s military life is dated back to 1875, when he joined F Company of the QOR, in command of Capt (Now Lieut.-Col) Hamilton.

Two years later the old Law Student’s Company was organized and John Crean became a sergeant of the new organization. Later he was made sergeant-major. After two years he took a commission and rose to the rank of captain.

He then joined the Gold Coast Regiment of the West African frontier force. Six years of service in a climate so hazardous to health that officers were of necessity allowed a six months’ furlough each year, served to wreck the robust captain’s health beyond recovery.

Eventually he was obliged to leave the Gold Coast force on account of his health and was appointed to a position in the battery here, ranking as captain; but, owing to continued ill-health he was never to take over the duties incumbent to the office.

Capt Crean was one of the most popular officers in the corps and was held in high esteem by his many friends. He had always taken a great interest in all athletics and was very hardy with the gloves, having taken successful parts in several boxing bouts in some chief athletic events.

Captain Crean was a man about 47 years of age and is survived by a wife, a widowed mother, two brothers and four sisters. He was a prominent member of the Anglican Church and a Conservative in politics. Mr Thos. J Crean, of Union avenue, Montreal, is a brother of the deceased.

Article from Into the Heart of Africa; Jeanne Cannizzo 1989:

One of those who fought for Crown and Empire was John V. Crean of Toronto. Born in 1858, he joined the Queen’s Own Rifles when he was eighteen eventually becoming sergeant major. A professional soldier all his life, he took part in the campaign against the metis in western Canada during the uprising of 1885. Later, with the Gold Coast Regiment of the West African Frontier Force, he led a contingent of Hausa soldiers in Ghana.

The Hausa are an Islamicized people living in northern Nigeria, well known as both long-distance traders and soldiers. Under the direction of British officers, they were widely used as infantry throughout the colonies of West Africa. Together Crean and his troops took part in the Asante War of 1900.

The Asante lived in one of the most powerful states in West Africa. A wealthy trading empire and political confederacy, the Asante kingdom had come into conflict with the British throughout the 19th century. Having suffered a major military defeat in 1874 and the exile of their king in 1896, the Asante rose again in 1900, after the governor of the British Crown Colony of the Gold Coast (now part of Ghana) tried to take possession of the Golden Stool, which enshrined the soul of the nation. A symbolic rather than utilitarian object, it was never actually sat upon.

Colonial authorities were unsuccessful in their attempt to take the stool, but the Asante confederacy ceased to exist after the campaign of 1900 until it was restored in 1935.