B/117602 Rfn “Ted” Crawford was born on January 18, 1914 in Espanola, ON. Son of Thomas A. and Nellie Crawford, husband of Marie Edmee Crawford, of Kapuskasing, Ontario. He joined the Royal Canadian Army on October 5, 1943 and served with the Queen’s Own Rifles of Canada, A Company in England and Holland during World War II. Signalman Crawford was awarded the 1939-45 Star, the King George Medal, the Canadian Volunteer Service Medal with Clasp, and the France and Germany Star. Ted was killed in action on April 6, 1945 in Holland and was awarded the Medal of Remembrance posthumously for the Liberation of Holland and the Canada Medal for the 50th Anniversary of the Liberation of Holland. Ted is buried in the Holten Cemetery in Holland.

His page at Library and Archives Canada is here.

His page on the Canadian Virtual War Memorial is here. 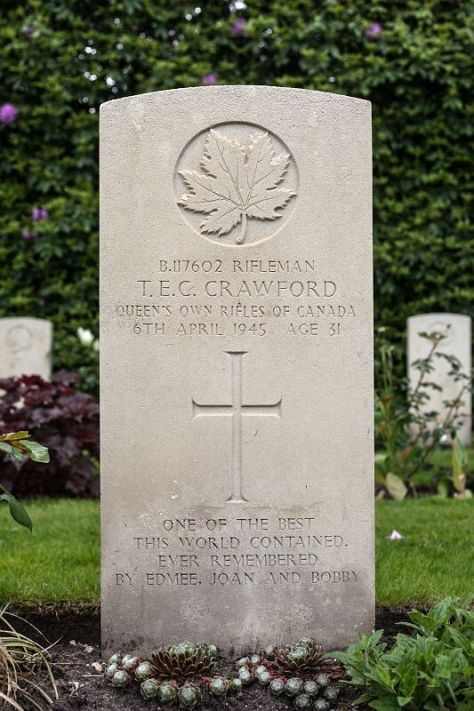