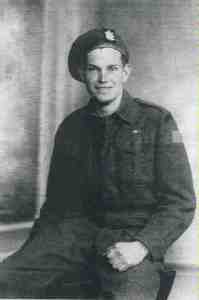 B24397 Rifleman James Robert Catling was born on Cockburn Island, Ontario on June 11, 1918, son of Charles and Loletta Catling. He was a farmer and foundry worker.

He enlisted in the Army on November 22, 1940 and served with the Queen’s Own Rifles of Canada during World War II. At one time as a Rifleman he was part of the Military Police in Canada. James married Agnus McLeod and had one child Clarence. James was killed in action in on D-Day, June 6, 1944. He had received seven medals.

His page at Library and Archives Canada is here.

His page on the Canadian Virtual War Memorial is here.