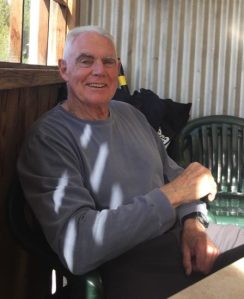 Bob’s long career dedicated to public service and leading others started in the military and evolved into many years of distinguished service as a police officer. He served with the Queen’s Own Rifles from 1959 to 1966, was stationed in West Germany with NATO Forces from 1960 to 1962, served in the motorcycle traffic section of the Calgary Police Service, joined the Delta Police Department in 1970 and retired with the rank of Staff Sergeant in 1999.

Bob was a founding member of the Delta Police Pipe Band. Always noted for his immaculate dress, deportment and military bearing Bob proudly served as Drum Major for the Edinburgh Tattoo, the Royal Nova Scotia International Tattoo and many other performances until his retirement in 2002.

Bob died 7 July 2017. Bob and his wife Franca were traveling by motorcycle near their summer home at Green Lake, B.C. when they were struck by a distracted driver. Bob tragically succumbed to his injuries during air transport to Kamloops Hospital.