#7301 Sergeant Albert Beattie was born about 1873 in Campbellford, Ontario, son of William Beattie and Eliza Victoria Smith. The family eventually moved to Bellwood Avenue in Toronto.

In 1891 he joined the 48th Highlanders of Canada and served with them until 1894. He then joined the army full time at Stanley Barracks where he served for six years.

In the summer of 1899 he retired from the Regular Force and joined the 2nd Battalion, The Queen’s Own Rifles of Canada, Captain Wyatt’s Company as a Colour Sergeant.

On 20 October 1899 he enlisted with the 2nd Special Service Battalion (C Company) of the Royal Canadian Regiment in order to serve in South Africa in what is commonly known as the Second Boer War. There he earned the Queen’s Medal for South Africa with clasps for Paardeberg, Driefontein, and Cape Colony.

He died of enteric fever (more commonly know today as typhoid) on 14 April 1900 in Bloemfontein and is buried President Brand Cemetery in Bloemfontein, South Africa. 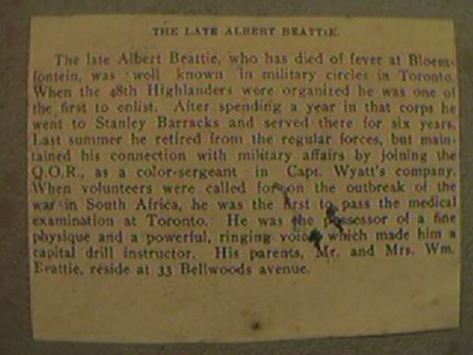