916013 Regimental Sergeant Major (WO1) Joseph Henry Bate was a veteran of the First World War and RSM of the 2nd (Reserve) Battalion of the Queen’s Own Rifles from 1940 – 1942 during the Second World War.

Born in Portsmouth England in 1882, at the time of his attestation into the 198th Battalion Canadian Expeditionary Force in February of 1916 he listed his occupation as Tailor, had a wife Elma and had 7 months previous service in the Queen’s Own. Arriving in England as part of the 198th Battalion in April 1917 he was promoted to Sergeant but reverted to Corporal by February 1918 in order to proceed overseas with the 20th Battalion CEF. In August 1918 during service in France he suffered gun shot wounds to his right eye and index finger and in September he suffered multiple gun shot wounds. He returned to Canada and was discharged from active service in March 1919.

Bate subsequently rejoined his old regiment sometime before 1930 where he is seen in a photo of the Sergeants’ Mess. He was appointed Brigade Sergeant Major of the 6th Infantry Brigade in 1938 and RSM of the 2nd (Reserve) Battalion from 1940-1942 during the Second World War. 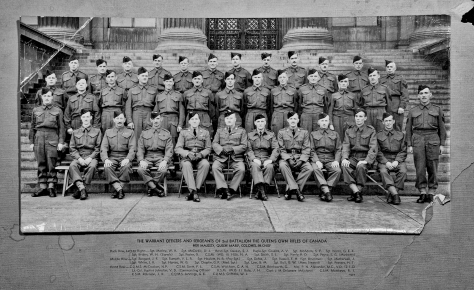 You can see his 1st World War records here.