Corporal Colin Fraser Barron, VC was born on 20 September 1893 in Baldavie Cottage in Boyndie, Banffshire, Scotland. His mother, Maggie Barron, was a cleaner and his father, William Cowie, was a soldier. They were not married.

He emigrated to Canada in March 1910, becoming a railway worker in Toronto. He enlisted in the 48th Highlanders, a militia unit in May 1913 and was posted to H Company. He volunteered for the Canadian Expeditionary Force in January 1915 and was posted to D Company, 35th Battalion. On 31 July 1915 he joined the 3rd (Toronto) Battalion. He was promoted to Lance-Corporal on 8 April 1917, the day the Canadian Corps captured Vimy Ridge.

On the morning of 6 November 1917, the Canadian First Division were facing the enemy strong points along the spurs feeding onto the main ridge north-west of Passchendaele with the aim of taking Vine Cottage, one of the largest pillboxes in the sector. They would be hampered by the rain and mud. Slowly and at considerable loss, Lieutenant H.T. Lord’s D Company closed in on Vine Cottage, but they were driven back before they could get within bombing range. However, Cpl Colin Barron, commanding one of the battalion’s Lewis gun sections, decided to carry on and managed to get his weapon close to fire at ‘point-blank’ range. Two of Vine Cottage’s three machine-gun crews were wiped out by his deadly fire. He couldn’t see the third gun at first, but before the pillboxes crew could react, followed by some of his platoon, he attacked and took out four men and the rest were taken prisoner. Barron finished by turning the captured machine guns on to those who had escaped. For these actions, he was awarded the Victoria Cross.

In early 1918 he was assigned to the Canadian Corps Lewis Gun School as an instructor. In March 1918 he returned to Scotland to receive a gold watch from the Duke of Richmond and Gordon and a wallet of treasury notes raised by public appeal.

He returned to Canada a Sergeant and was demobilized in April 1919, but re-enlisted in the 48th Highlanders of Canada in 1921 until 1931 rising to Colour Sergeant Major. He married and had two daughters and had a variety of jobs including serving with the Provincial Police at Kitchener, Orangeville and Niagara Falls.

When the Second World War broke out, the 46-year-old joined the Royal Regiment of Canada and took part in the occupation of Iceland. He later became Provost Sergeant-Major at 1st Division headquarters in England.

He retired as a Lieutenant and joined the Canadian Corps of Commissionaires for whom he worked at Canadian Broadcasting Corporation, the Don Jail, and Sunnybrook Hospital.

Barron was among the Commonwealth holders of the Victoria Cross who attended the Coronation of Queen Elizabeth II. 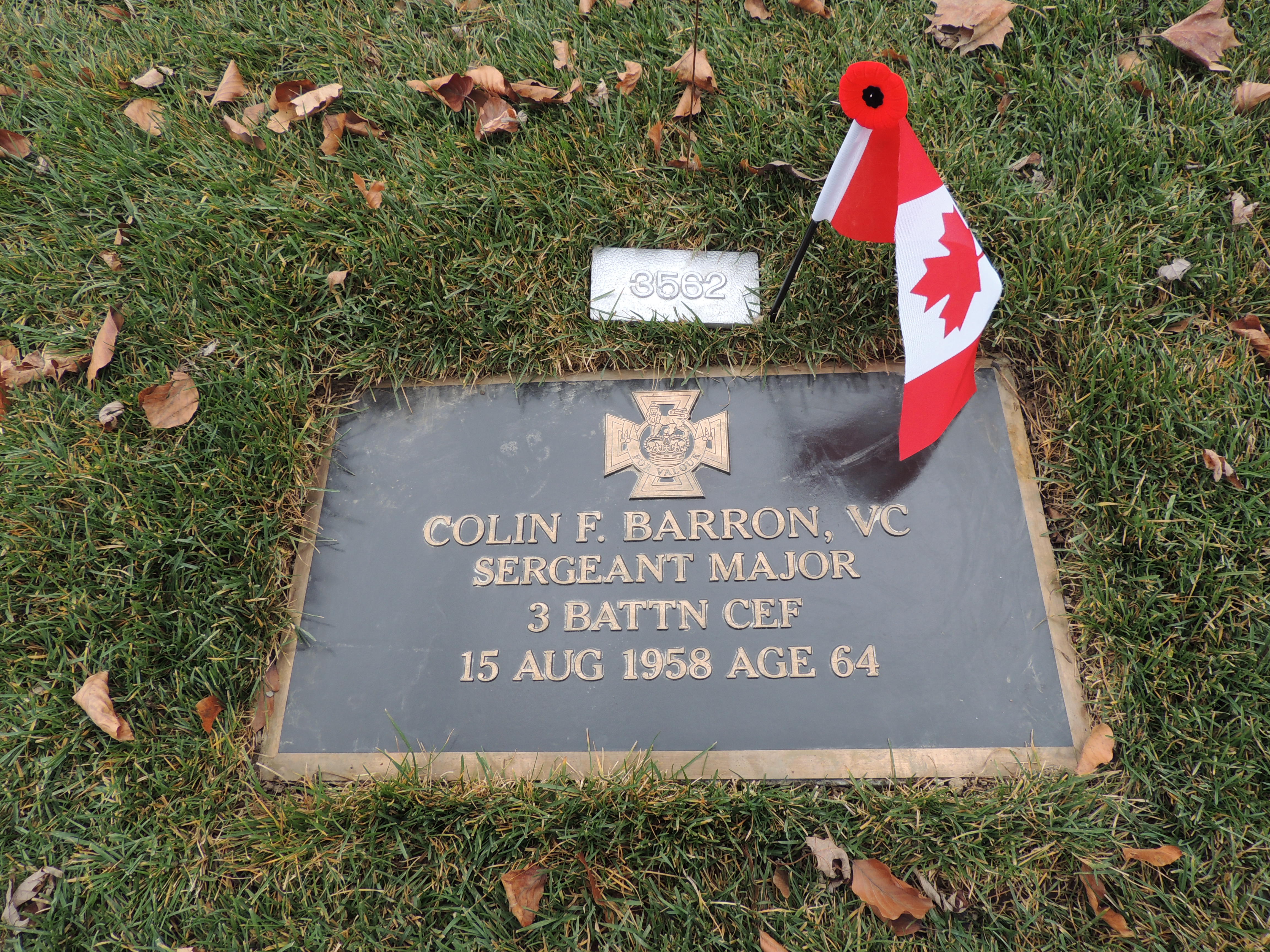 He died in Toronto, Ontario on 15 August 1958 and was buried in the Veteran’s Plot, Prospect Cemetery in Toronto.

“For conspicuous bravery when in attack his unit was held up by three machine-guns. Corpl. Barron opened on them from a flank at point-blank range, rushed the enemy guns single-handed, killed four of the crew, and captured the remainder. He then, with remarkable initiative and skill, turned one of the captured guns on the retiring enemy, causing them severe casualties.

The remarkable dash and determination displayed by this N.C.O. in rushing the guns produced far-reaching results, and enabled the advance to be continued.”

There is a Barron Road in East York, Toronto named in his honour: