B138767 Rifleman Russell Kenneth Adamson of the Queen’s Own Rifles of Canada, was born at Wyebridge on August 23, 1924, and grew up in southwestern Ontario, Canada. He was the second oldest son of William and Marjory Adamson. Perhaps following the example of his elder brother, Russell enlisted to serve with the Canadian Army Overseas forces in January of 1943. 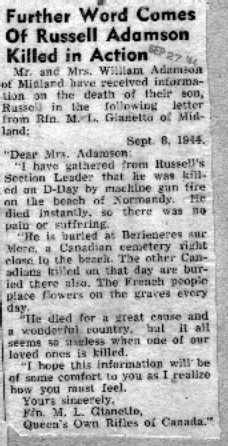 Rifleman Adamson spent only a short stint in high school. In a career change not uncommon in the early 40s, Russell left high school early, preferring to seek active employment with local townspeople.

At the time of his enlistment, he was working as a delivery truck driver for Preston’s grocery/general store in Midland Ontario.

Following training in Canada, Adamson joined with Canadian forces overseas in England. He was killed in action during the D-Day offensive near the French village of Bernieres-sur-Mer. Later, his Mother received a letter from Rifleman M. L. Gianetto of Midland, saying that her son, Russell, had been killed “in machine gun fire on the beach of Normandy. He died instantly, so there was no pain or suffering”. (VAC News clipping)

He is buried in the Beny-sur-Mer Canadian War Cemetery.