Description
Three bronze plaques, two in English and one in Dutch, commemorating QOR of C’s capture of Oostburg on 25 October 1944, with the names of 17 riflemen Killed in Action. Unveiled on 10 May 2000. 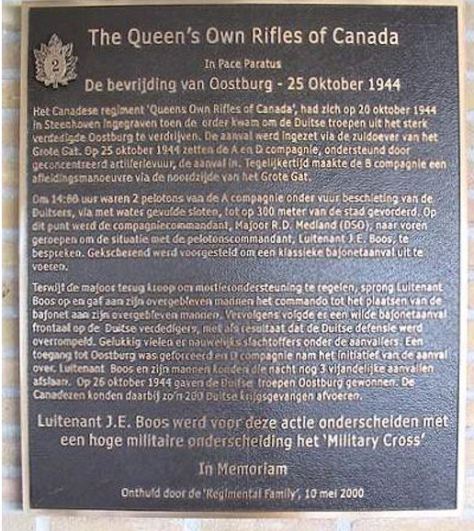 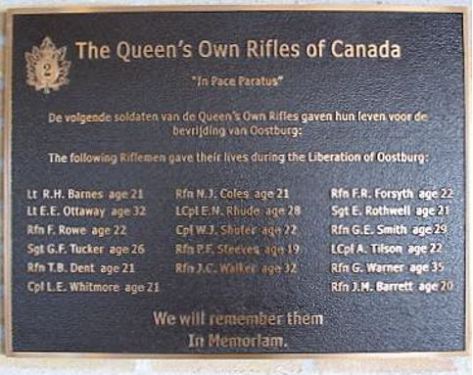 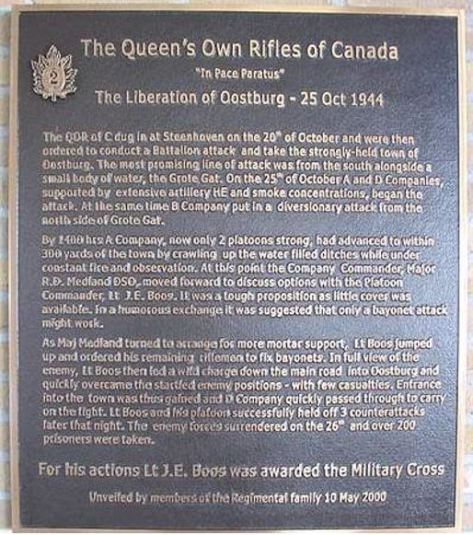 On the plaque in the middle the names of the casualties can be read:

The Queen’s Own Rifles of Canada
“In Pace Paratus”

The following Riflemen gave their lives during the Liberation of Oostburg:

We will remember them
In memoriam.

On the right hand side plaque the following text can be read:
The Queen’s Own rifles of Canada
“In Pace Paratus”
The Liberation of Oostburg – 25 Oct 1944The QOR of C dug in at Steenhoven on the 20th of October and were then ordered to conduct a Battalion attack and take the strongly-held town of Oostburg. The most promising line of attack was from the south alongside a small body of water, the Grote gat. On the 25th of October A and D Companies, supported by extensive artillery HE and smoke concentrations, began the attack. At the same time B Company put in a diversionary attack from the north side of Grote Gat.

By 1400 hrs A Company, now only 2 platoons strong, had advanced to within 300 yards of the town by crawling up the water filled ditches while under constant fire and observation. At this point the Company Commander, Major R.D. Medland DSO, moved forward to discuss options with the Platoon Commander, Lt J.E. Boos. It was a tough proposition as little cover was Available. In a humorous exchange it was suggested that only a bayonet attack might work.

As Maj Medland turned to arrange for more mortar support, Lt Boos jumped up and ordered his remaining rifleman to fix bayonets. In full view of the enemy, Lt Boos then let a wild charge down the main road into Oostburg and quickly overcame the started enemy positions-with few casualties. Entrance into the town was thus gained and D Company quickly passed trough to carry on the fight. Lt Boos and his platoon successfully held off 3 counterattacks later that night. The enemy forces surrendered on the 26th and over 200 prisoners were taken.

For His actions Lt J.E. Boos was awarded the Military Cross

Unveiled by members of the Regimental Family 10 May 2000.