On the 20 March 1964, Lance Corporal Joseph Gerald Organ was awarded the Queen’s Commendation for Brave Conduct by the Chief of the General Staff, Lieutenant General G. Walsh, CBE, DSO, CD at a special ceremony held at Work Point Barracks.

The award was a result of LCpl Organ’s quick thinking and action during grenade throwing practise in Germany in 1963. When a soldier from the RCASC [Royal Canadian Army Service Corps] accidently dropped a live grenade in the throwing bay supervised by LCpl Organ, the latter shouted “Get Out” and at the same time forced the soldier out of the bay and to the ground behind the protection wall. His quick action undoubtedly saved a fellow soldier from serious injury or death. LCpl Organ is presently serving with 1st Battalion as a Section Commander in the Assault Pioneer Platoon of Support Company. 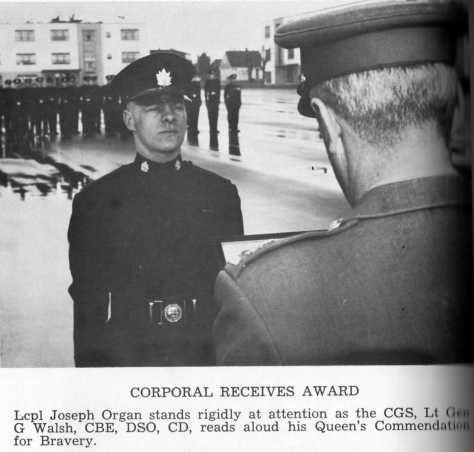