On 12 January 1866 No 11 Company “Upper Canada College” of The Queen’s Own Rifles of Canada (QOR) was formed under the command of Captain Frank C. Draper.

Draper seems like an excellent choice to fill this role as he was both a UCC Old Boy (1844-52) and had been a QOR officer since 1863. In 1874 he would resign his commission and become Toronto’s Chief Constable (i.e. Police Chief).

The following article is excerpted from “COLBORNE’S LEGACY: Upper Canada College 1829-1979″ by Richard B. Howard

“It is Difficult to Establish a Date on which the College Rifle  Company, alias the Rifle Corps, later the Cadet Battalion, held its first official parade…..

The first hint of any military enthusiasm at UCC is mentioned earlier, when during the 1837 Rebellion, a troop of boys offered their services to the Lieutenant-Governor. …..

Early in Principal Cockburn’s regime, military drill was the subject of much attention in schools in England, Canada, and the United States. Ways were sought to promote what was thought of as a patriotic  spirit. The aim was to foster love of country along with a disposition to defend it, and to develop obedience and discipline. The important habit of prompt obedience could then be carried over into the classroom. By 1865 drill had been introduced into schools in many Ontario centres, including Toronto, London, and Port Hope. The College was probably one of the earliest participants; it is known that in 1863 the older boys paraded weekly under a Major [Henry] Goodwin, a strict disciplinarian but “kind-hearted” and “cheery.”

In 1865 Fenian troubles were creating much unease in Canada, and several Upper Canada College students asked Principal Cockburn’s permission to transform the recently formed cadets into a company of the Queen’s Own Rifles.

In December of that year an unknown number of pupils were enrolled, and in January 1866 the company was attached to the 2nd Battalion, Queen’s Own Rifles.

Thus , Upper Canada College was possibly the second Canadian school to have an “official” cadet corps, following Bishop’s College School in Lennoxville, Quebec, whose corps was organized in 1861.
……………….

The Queen’s Own were called out on March 8, 1866 , and though the College boys were not specifically mentioned, they appeared at every parade and march anyway (they even had their own marching song).

On St. Patrick’s Day the company waited for any trouble arising
out of the parade, but nothing happened . When the Fenians actually struck at Fort Erie on June 1 , the Queen’s Own were ordered out to meet them.  School was dismissed for the day and the College company reported for duty only to find that, by orders of General Napier, they must “…. remain in garrison to guard the armouries and official stores. Some students wanted to “desert” to join the battalion at the front, but evidently no one did.

“They performed the duty which was given them. ” After the raid there were plenty of volunteers in Toronto, and so the College company was released; but, just in case, it was “agreed that should the College bell ring at any time out of class hours, the members of the Company would . . . assemble at the Armoury.” The bell did, in fact, ring once, and the College boys were the first to report to the armoury, but it was a false alarm. A dense crowd gave them three cheers.

It has been thought that the Upper Canada College Rifle Company received “battle honours” for its passive though honourable role in the Raid. Not so. The Queen’s Own Rifles did not receive such honour; neither did the College. However, General Napier did give them honourable mention in his report, and it is true that they were called out for service (along with Bishop’s College School) — apparently the only time in Canadian military history this has happened.

Over thirty years later, the government decided to present medals to those who were engaged on active service in the Fenian Raid: the College Rifle Company, though denied the privilege of fighting, had performed some important functions, and all the members of the company still living received a medal.”

As of October 22, 1886, the Rifle Company officially became a Cadet Corps (#17) affiliated with The Queen’s Own Rifles of Canada. During the First World War, the Cadets’ association with the Queen’s Own had lapsed, and by 1923 two regiments, the Toronto Regiment (now the Royal Regiment of Canada) and QOR were requesting that the Corps affiliate itself with them. After some dispute between the three parties, the College settled on the Queen’s Own again by 1927.

In 1976 the compulsory “Battalion” was disbanded to be replaced the following year by a voluntary Cadet Corps. This lasted until 1988 when it was officially disbanded as of April 15th.

Over most of these 144 years, the connection between UCC and the QOR remained very strong. Many Old Boys went on to serve with the QOR – some even becoming Commanding Officer. Even today, the Regiment values this long and distinguished relationship between one of Canada’s oldest continuously operating schools and Canada’s longest continuously serving infantry regiment.

You can read more: 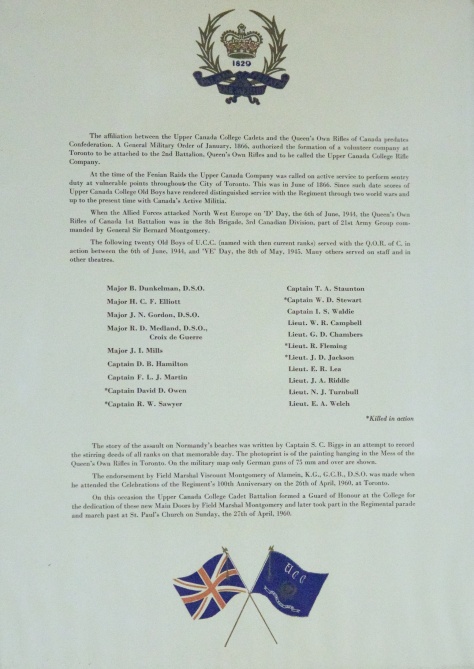